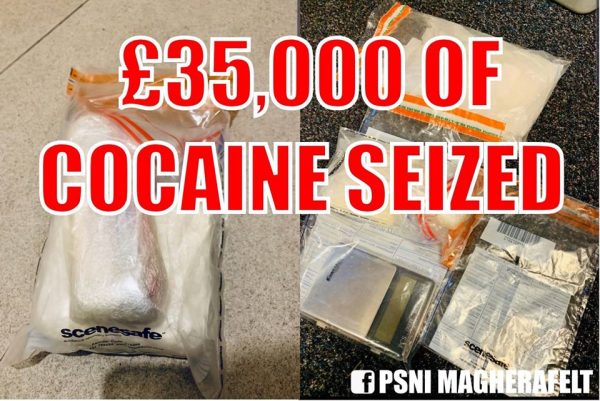 POLICE are jubilant after a tip off from the public led them to a £35,000 cocaine and three drug dealers fast asleep.

The arrests and Class A drug seizure was made under the 1971 Misuse of Drugs Act by officers from the Mid-Ulster District Support Team (DST) after information was supplied from a member of the public via Facebook.

“Everything in the dream starts to go a dark shade of green.

“Then comes that heart sinking moment as you open your eyes and see the entire Mid Ulster District Support Team gathered around your bed smiling back at you.

“You ain’t smiling no more. This ain’t no dream.

“As much as we love our Big Red Key we also love our Silent Stealth Keys.

“£35,000 of cocaine found today during searches in Magherafelt.

“Seized and taken off the streets of Mid Ulster.

“Three arrested after being rudely awakened by DST.

“Gotta love your local Facebook page – you send us the info, we’ll do the needful.”