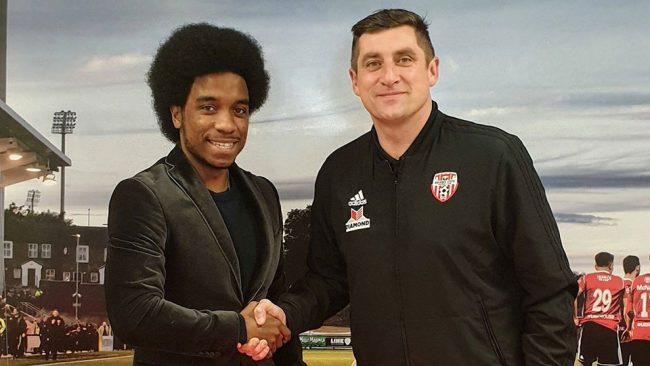 DERRY City have signed forward Walter Figueira as Declan Devine adds to his squad for the 2020 season.

The striker may be familiar to the Brandywell faithful as he bagged himself two goals against the Candystripes in August for Waterford in the EA SPORTS Cup semi-final that City went on to win 4-2.

“Derry fans who saw him play for Waterford against us in the Brandywell will know exactly the type of player we’ve brought here.

“He wants to play every minute of every match and that’s what we need at this club.

“He had a host of offers from clubs in Ireland and Scotland so we are delighted to have secured his signing.

“Walter obviously won’t be the last player coming in.

“The hard work continues to strengthen the squad ahead of what is certain to be a fiercely competitive league in 2020.”

The former Chelsea youth player signed for Waterford halfway through the 2019 season and also scored in wins against Cork City and Sligo Rovers.

The English-born 24-year-old joined Chelsea in 2010 after impressing at Hampton & Richmond Borough, but injury hampered his progress with the U18s and U21s.

The striker adds attacking options for Declan Devine, with the recent news that Darren McCauley will not be returning for the 2020 season.

The player was linked with a move to Scotland, but has opted to move north to the Brandywell with the lure of European football and the prospect of helping City close the gap at the upper end of the Premier Division.