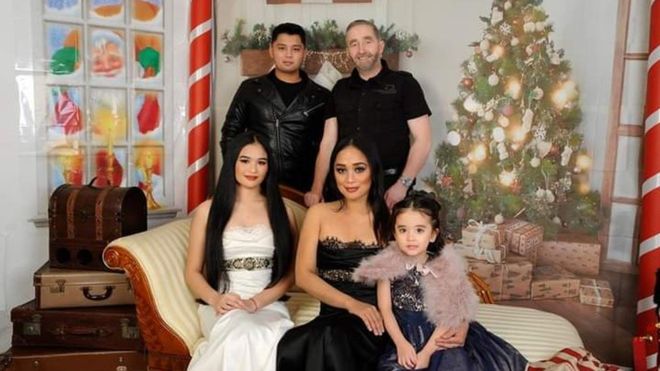 Chris Cooke and his wife, Lolita with their children

A DERRY man has turned to the Irish government for help after his Filipino-born wife was refused British citizenship.

Chris Cooke and his wife, Lolita, married in 2007, but because it was after her visa expired she is classed as an overstayer.

UK Immigration will not deport her, but neither she nor two of her children can access NHS healthcare.

In the meantime, the family have applied for Irish citizenship.

If this fails, Mr Cooke said he does not know where to turn next.

The pair came to Derry in 2006 on a fiance visa and married in 2007, but because that was after the six-month visa expired Lolita is classed as an overstayer and not a UK citizen.

Mr Cooke said: “We had a robbery at home where a lot of things went missing, documents, so we lost passports with the visas in them and then I didn’t realise I should’ve contacted [the]Home Office and tried to inform them.

“From then to now, we have never been able to get regularised or legalised,” he said.

If the Irish citizenship request is refused, Mr Cooke said leaving the city he has called home is a “possibility”.

The couple have three children, two of whom were born in the Philippines and Mr Cooke explained it is the same for them.

“Dental treatment for the kids, it’s the same thing, we pay cash or we don’t get it,” he said.

Mr Cooke said, at one point, they thought Lolita was going to be deported.

In 2014, Mr Cooke asked the Home Office for a letter to say they had no objection to her being in the North of Ireland, or getting Irish citizenship.

The Home Office asked for additional information and a letter to prove she was in the North of Ireland legally – which Mr Cooke could not supply, due to the theft of documents.

“At one point, she was pulled into the immigration centre in Belfast for deportation and it looked like she was going to get deported that day”, he said.

It was only after the Home Office staff looked at his paper work the family was eventually allowed to return home to Derry.

“They decided that she wasn’t an immigration issue, she entered the country legally and we got married here.

“They let us go home with the advice to get it sorted,” he said.

A spokesperson for the Department of Justice and Equality in the Republic said it does not comment on individual cases.

The Home Office also said it doesn’t comment on individual cases and that questions about the application process for Irish citizenship are a matter for the Irish authorities.