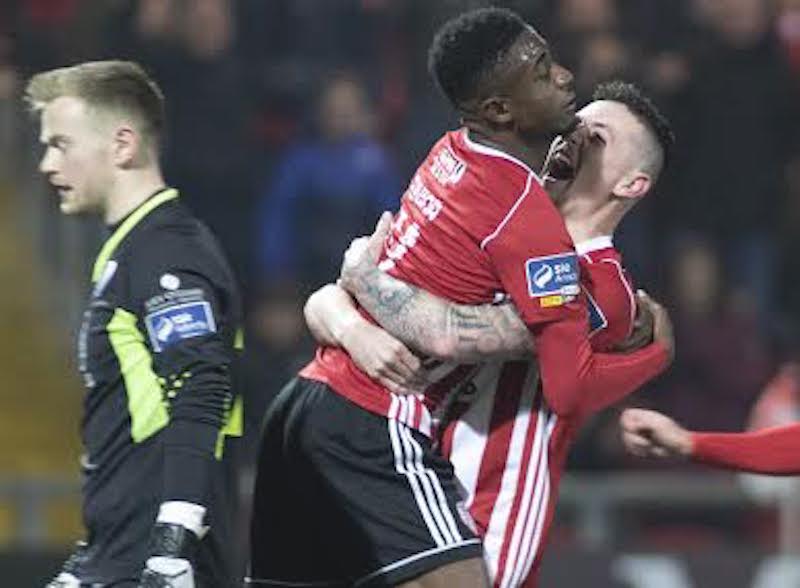 EUROPEAN FOOTBALL will be back on Foyleside in 2020 as a Junior Ogedi-Uzokwe hat-trick eased to a derby win over Finn Harps.

By Chris McNulty at the Ryan McBride Brandywell Stadium. Pictures by Joe Boland

A brace from the English attacker in the opening 23 minutes sent Derry on their way back into the Europa League for the first time since 2017.

When Ogedi-Uzokwe slammed in a third on 64 minutes, Derry were home and hosed.

Grant Gillespie fired home his first goal in the Candystripes 12 minutes from time to end the season on a high.

In spite of a disappointing 3-1 loss to St Patrick’s Athletic on Tuesday night, Devine kept faith with the same XI.

Derry swept into the lead when Ogedi-Uzokwe slotted past the advancing Jamie Bell in the 15th minute. Put through by Barry McNamee’s delicious through ball, Ogedi-Uzokwe made no mistake with a cool finish. 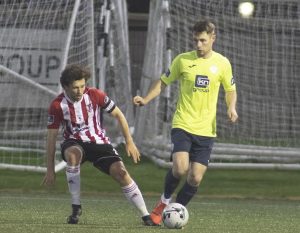 In between times, Colm Deasy denied David Parkhouse with a timely block as the Candystripes hitman had a go from a McNamee pull-back.

Earlier, Ally Gilchrist headed into the side netting from Jamie McDonagh’s corner as City looked to unsettle the hosts.

Harps, who will play the first leg of the promotion-relegation play-off on Monday, showed eleven changes to a roster that included rookie goalkeeper Bell, another debutant in Kieran Farren and Shaun Doherty made his first start in Harps’ colours. 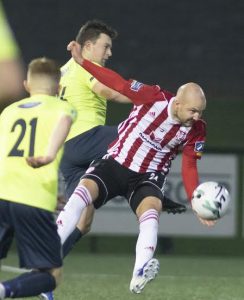 Harps – who will face Drogheda United in the first leg of the promotion-relegation play-off on Monday – changed all 11 of their personnel for this one.

Young ‘keeper Bell made his first team debut, as did Kieran Farren and there was a first start for Shaun Doherty.

Harps came out well at the outset of part two.

Liam Walsh was unable to overly work Derry ‘keeper Peter Cherrie. When McNamee played in Colm Deasy soon after, the small away support sensed a goal, but Grant Gillespie intervened to make a timely challenge.

Niall Logue fired off target after getting on the end of a Daniel O’Reilly cross, while Derry penalty claims were waved away when Parkhouse went down under a tackle by Logue, who came in for Cowan at the interval. 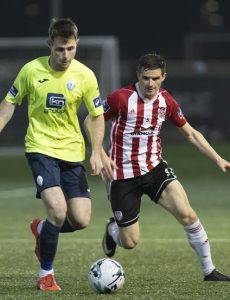 Ogedi-Uzokwe – who later had another strike ruled out – was picked out by McDonagh after the hour and didn’t need a second invite as he riffled past Bell.

Gillespie connected to Ciaran Coll’s cross and shot home a fourth to complete the night and the season.