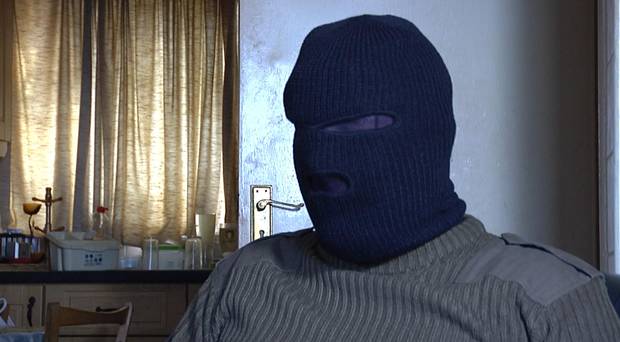 THE New IRA has stated they intend to target any infrastructure that appears along the Irish border.

The threat was issued in a rare television interview by the terror group.

Speaking to Channel 4’s chief correspondent Alex Thompson, a masked figure representing the dissident republican group was interviewed on camera at a safe house in the Irish Republic with his words spoken by an actor.

During the interview, he also said the New IRA apologised for the murder of journalist Lyra McKee in Creggan in April this year.

He rejected, however, as “grotesque” a criticism from Ms McKee’s partner Sara Canning that inciting vulnerable young people to commit violence made them worse than paedophiles.

He added that any border infrastructure would be “a legitimate target for attack and armed actions against those infrastructures and against the people who are manning them.”

Asked if this meant bombings and shootings, he said: “Yes. It’s important to understand that this is a country under occupation by Britain.

“As in any colonial situation, people have the right to respond by all means necessary.”

He rejected that a backstop that included a border down the Irish sea would be an improvement.

“I don’t think you’re understanding what I’m saying here. Regardless of the form of occupation, whatever kind of border there is. Be it soft or so-called hard border, that’s irrelevant.”

He maintained the Good Friday Agreement was a surrender, which had been superseded by subsequent agreements like Leeds Castle, St Andrews and Hillsborough.

Pressed on the group’s lack of legitimacy, he said the New IRA had more support in Ireland than the Conservative or Labour Party.

He also dismissed the lack of mandate compared to mainstream political parties across Ireland.

“The political parties you reference are silent about the armed activities of the state. For instance the £25m HQ for MI5 at Palace Barracks (in Holywood),” he said.

“There are 700 MI5 operatives in Belfast City alone.

“Every PSNI officer is armed with a Glock pistol or a Heckler and Koch rifle. Contrary to popular belief there are still thousands of British soldiers operating in the six countries. And there are also armed pro-British death squads operating under the flag of Loyalism.

“So, therefore, the IRA will take no lectures on morality, or the futility of violence from those who remain morally in favour, if not tactically.”

Asked if the New IRA would apologise for the murder of Lyra McKee, he said: “Absolutely. We listened to calls from the Republican base at the time, they rightly called for the IRA to take responsibility for the tragic loss of Lyra McKee’s life, to apologise.

“As we stated at the time, the loss of any civilian life in the conflict is a tragedy.

“We directly apologised at the time to her partner, her family and her friends and on behalf of the IRA, I reiterate that apology now.”

On comparing the IRA to paedophiles, he answered: “Personally, I find that comparison is grotesque. Young people have always been the backbone of the republican struggle.

“They bring an energy and a vibrancy to it with their activism. Young people are not sought out by the Republican movement, they seek it out.”

Questioned on why the New IRA could hope to succeed where the Provisional IRA could not over a generation, he said many of their current members had experience of the PIRA from Executive Council down to rank and file volunteers.

“That gives our organisation both a valuable insight now, and the benefit of hindsight as to why the Provisional IRA failed in all of its objectives following the abolition of Stormont in 1972.”

While describing the New IRA as being in a period of “consolidation and rebuilding,” he finished by warning that “it doesn’t reduce our operational capabilities.”

New IRA say they will attack any infrastructure erected on Irish border was last modified: October 17th, 2019 by John