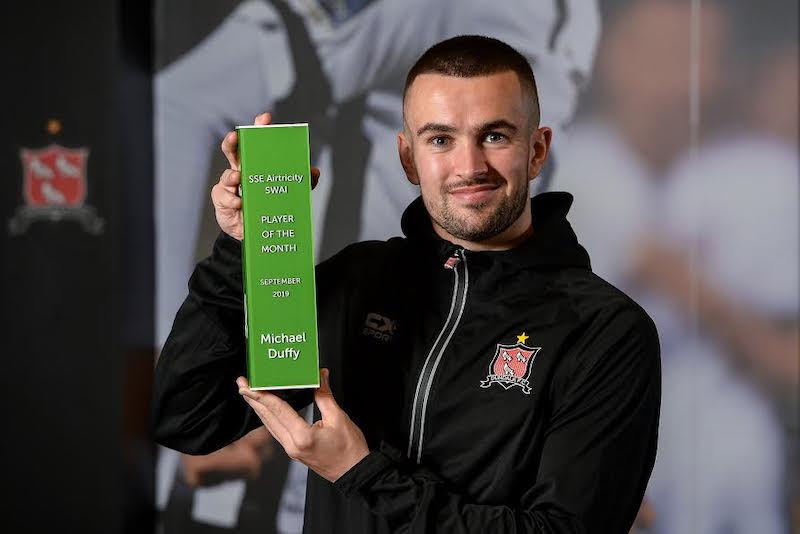 MICHAEL DUFFY has been named as the SSE Airtricity/Soccer Writers’ Association Player of the Month for September.

The 25-year-old bagged himself three goals, including a fabulous strike against Shamrock Rovers to seal the Lilywhites’ fifth Premier Division title in six years.

Duffy was integral to Vinny Perth’s side over an incredible few weeks for the Louth club, as they also lifted the EA Sports Cup and booked their place in the FAI Cup final.

He claimed most votes to pick up the prize ahead of Dundalk team-mate Chris Shields and Shamrock Rovers striker Aaron Greene, who was third.

“It was a mad month,” Duffy said. “It’s one that we’ll all look back on fondly.

“I was pleased because I chipped in a few big goals. There were a couple of games where I was quiet, like the EA Sports Cup final. I didn’t see much of the ball, but to score the winner right at the end was unbelievable. 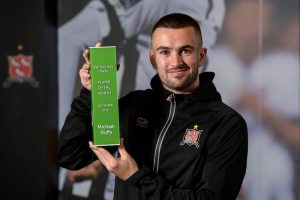 17 October 2019; Michael Duffy of Dundalk with the SSE Airtricity/SWAI Player of the Month Award for September 2019 at Oriel Park, Dundalk. Photo by Oliver McVeigh/Sportsfile *** NO REPRODUCTION FEE ***

“Everything just seemed to fall for me, and I was in the right place at the right time. To win the title the way we did against Shamrock Rovers made it a special night.”

Duffy signed for Dundalk having returned from a spell at Celtic.

Previously, he played with Derry City and had played schoolboys football with Foyle Harps and also with Kildrum Tigers in Donegal.

If Dundalk can see off the Hoops at the Aviva Stadium on Sunday, 3 November, they would become the first club to do the domestic treble since Derry City in 1989.

“We want to finish strongly in our last two league games, but all eyes will be on the FAI Cup final now,” Duffy added. “It’s going to be a massive day.

“If we could do the treble, I wouldn’t even know how to describe it. The fact that 30 years have passed since the last team achieved it shows that it’s not something that comes around very often.

“The boys will never forget the success they had in Europe, but if we can pull this off it will be something that stands to us for the rest of our lives.”