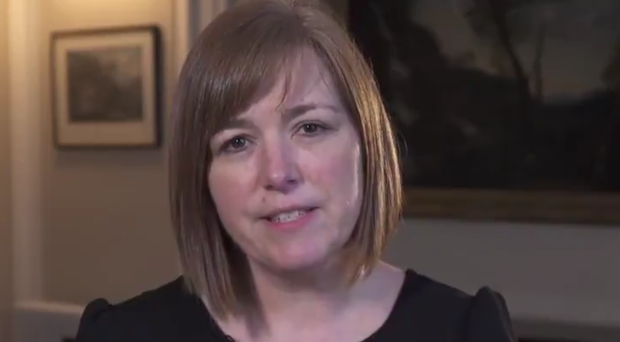 THE sister of Lyra McKee has said that she is devastated by the reaction to a Northern Ireland Office (NIO) video in which she called for the return of Stormont.

Nichola Corner appeared in the video, which was uploaded just after 10am on Wednesday morning, saying her family is “determined” to ensure “no other person is killed within Northern Ireland” and urging politicians to resurrect the Assembly and Executive.

The video was removed after provoking a social media storm, with the NIO being accused of the “appalling manipulation” of Ms McKee’s family.

Writing on her Facebook page Ms Corner said she was “totally devastated” by the response to her “very simple message”.

“My intention was always good and in the interests of all the people of Northern Ireland. I thought I was building on messages delivered previously, including the speech I gave on Sunday at the 1000 days rally at Stormont,” she wrote.

She said that given her message had been “so grievously distorted” she had asked the NIO to take down the video.

“I continue to stand by every single word spoken, but perhaps my political naivety contributed to me not realising that the public outcry was a potential outcome of taking part in the Twitter series,” Ms Corner wrote.

“I have no political affiliations with any group or party and do not wish my honest message to be tarnished by association with party politics.

“Had I foreseen any of these events, I would not have taken part.”

Following the backlash a spokesperson for the NIO said that the video had not been edited and had was “shared in good faith with Nichola’s consent”.

“Following the online reaction and in consultation with Nichola we have taken the video down,” the spokesperson said.

The video was recorded on Tuesday and Ms Corner, its understood, was briefed on how it would be framed.

It comes after she spoke at the We Deserve Better rally on Sunday which called for power sharing to be restored on what was the 1,000th day without local government.

In the NIO video she called for Northern Ireland politicians to restore devolved institutions now “because they are the people who have the power to make bigger changes”.

The immediate aftermath of the killing sparked a renewed round of talks in a bid to restore the devolved institutions.

After the video was posted a barrage of criticism was directed at the NIO.

Thousands viewed the video and hundreds more reacted to it with many calling for it to be deleted.

Alliance leader Naomi Long said the government was aware that if Stormont was restored it would deny woman and gay people rights to abortion and marriage.

“The NIO knows ‘now’ means denying both LGBTQ+ people and women their rights,” she tweeted.

“This is an appalling manipulation of a family’s grief.

“We’re ready to restore an Assembly & Executive capable of delivering equality and human rights for all of our people.”