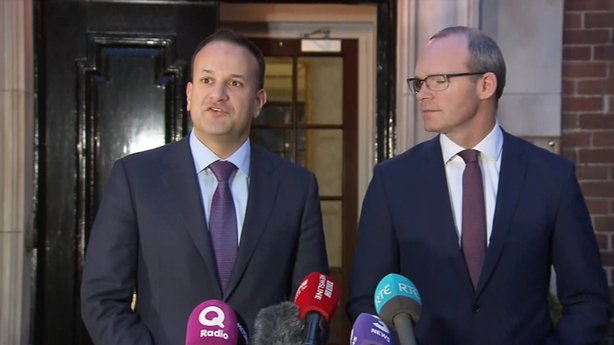 TAOISEACH Leo Varadkar has said the De Souza court ruling is “out of spirit” with the Good Friday Agreement.

Tribunal judges ruled on Monday that people born in the North of Ireland remain British citizens according to the law, even if they identify as Irish.

The Good Friday Agreement allows people to identify as British, Irish or both.

In 2017, Co Derry woman Emma De Souza won a case against the Home Office in relation to the issue.

It deemed she was British when her US-born husband Jake applied for a residence card, making the application under her Irish passport.

But on Monday an immigration tribunal upheld an appeal of the case, brought by the Home Office.

Speaking in the Dáil, Mr Varadkar said the Good Friday Agreement allows people in the North of Ireland to be British, Irish or both.

He said he would raise the case on Thursday or Friday when he meets Prime Minister Boris Johnson.

Mr Varadkar said he believed the British court ruling was based on a distinction between identifying as British or Irish as opposed to being a citizen.

“That is a misreading in our view of the Good Friday Agreement,” he added.

On Tuesday, Tánaiste Simon Coveney said the Irish government had concerns about “citizenship and identity provisions” of the Good Friday Agreement being delivered, and would raise them with Northern Ireland Secretary Julian Smith on Tuesday.

Anyone born in the North of Ireland has the right to identify as Irish or British or both, as a result of the Good Friday Agreement, signed in April 1998 by the British and Irish governments and local political parties.

The agreement said the British and Irish governments would: “Recognise the birthright of all the people of Northern Ireland to identify themselves and be accepted as Irish or British, or both, as they may so choose, and accordingly confirm that their right to hold both British and Irish citizenship is accepted by both governments and would not be affected by any future change in the status of Northern Ireland.”

A Home Office spokesperson said it was pleased the tribunal agreed that UK nationality law was consistent with the Good Friday Agreement.

“We respect the right of the people of Northern Ireland to choose to identify as British or Irish or both and their right to hold both British and Irish citizenship,” the spokesperson added.

In its ruling, the judges said that: “As a matter of law, Mrs De Souza is, at present, a British citizen at the current time.

“Whilst we fully appreciate her strength of feeling on this matter, it is not disproportionate… for her nevertheless to be required to give notice of revocation, if she wishes only to be a citizen of Ireland.”

The ruling added that in order to renounce British citizenship, an individual must pay a fee.

Mrs De Souza said she was “disappointed” and that she would now be taking her case to the Court of Appeal.