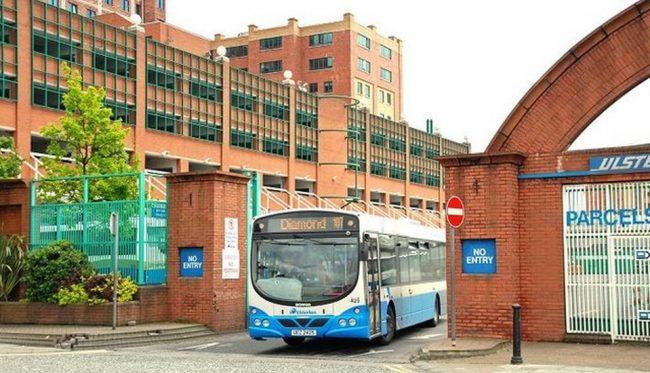 A passenger repeatedly head-butted a security officer trying to get him off a bus in Belfast, a court heard on Tuesday.

Prosecutors said Che O’Connor also spat in the face of a second guard after being found in a “disorientated” state on the service from Derry.

Deferring sentencing, a judge held that the 19-year-old had been “completely out of it” on drugs.

O’Connor, from The Old Fort in Derry, was due to be dealt with for two counts of common assault, disorderly behaviour, possessing cannabis and pregabalin, and two assaults on police.

Belfast Magistrates’ Court heard the security officers were attacked on August 19 at the Europa Bus Centre on Great Victoria Street.

They went up to the top floor of a double decker to remove O’Connor after it arrived from Derry.

According to a Crown lawyer the defendant appeared disorientated and lashed out as the first officer lifted some belongings from the floor.

“He is alleged to have head-butted him to the back of the head a number of times,” the prosecutor said.

“When a second officer intervened O’Connor is alleged to have spat in his face.”

As the defendant was being escorted off the bus he shouted “f*** off” and “I’ll kill you”.

Judge Peter Prenter was told O’Connor continued the verbal abuse in full view of members of the public.

When two police officers arrived he spat on one and in the direction of the other, the court heard.

Searches led to quantities of cannabis and pregabalin (Lyrica) being found on him.

Mr Prenter warned that the offences were serious enough to warrant immediate custody.

“This is a case where he was on drugs, completely out of it by the sound of things,” the judge said.

However, he decided to defer sentencing until next April, to check progress in an unrelated case.

He told the defendant: “This is your opportunity.

“If you mess this up you will be simply going to prison.”