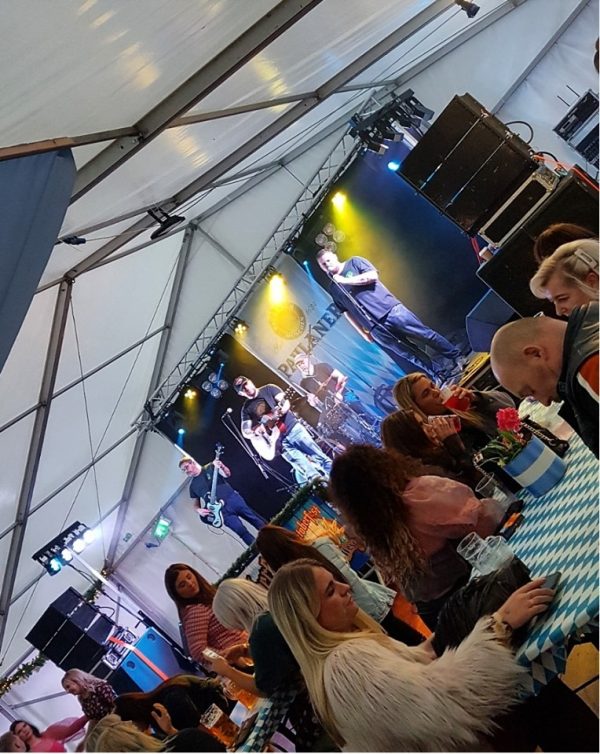 Kelly’s Men at Oktoberfest in Derry on Sunday

A DUP councillor has condemned sectarian chanting at an international festival in Derry on Sunday night.

Some of those who attended Oktoberfest felt they were forced to leave after the band Kelly’s Men started chanting “Up the IRA”, said David Ramsey.

He said constituents across the divide have been in touch with him to express their disgust.

“This is an international festival that takes place in a public place,” said Mr Ramsey of the festival, which is taking place in Guildhall Square.

“This didn’t just take place last night, it happened all weekend because there were a number of bands playing.

“There were people in there with Protestant friends who felt like they had to leave.”

The Oktoberfest festival is running over two weekends from Friday October 4 to Sunday October 13 and is run by a private company.

A spokesperson for Derry City and Strabane District Council said the council is not affiliated with the event and has not provided any form of funding.

The Department for Infrastructure, which manages the Guildhall Square site, has been approached for a response.

Added Mr Ramsey: “There were 206 people murdered by the IRA in Derry.

“Here we have a festival glorifying murder. I just can’t get my head around it,” said the Waterside councillor.

“It’s hard to understand how this happened – it’s like something you’d see at a private club and that’s their own business but not in a public space.

“A lot of people have been left in disgust, in shock and disgust that this was happening in their city,” he said.