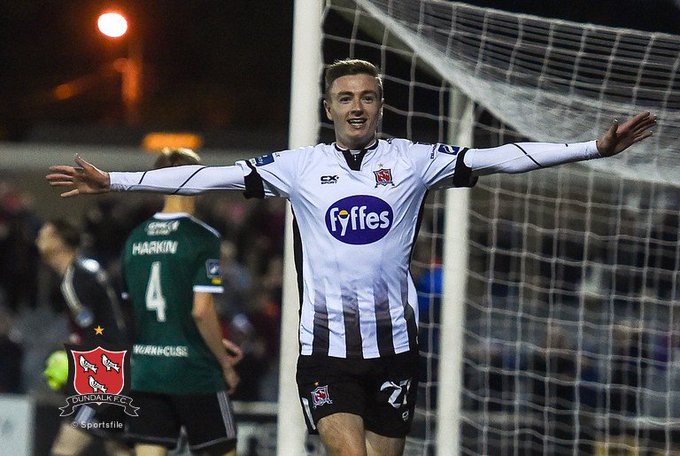 DERRY City hopes of Europa League qualificati./hopes with hit after they went down 1-0 to champions Dundalk in Friday’s league match at Oriel Park (kick off 7.45 pm).

Daniel Kelly swept home the winner from close range in the 64th minute after Jamie McDonagh failed to deal with Sean Gannon’s cross.

The defeat meant Derry drop to fourth in the table, two points behind Bohemians who beat Cork City 1-0.

The Candystripes have three Premier Division fixtures remaining, two of them home ties, the last a North West Dery match against Finn Harps.

Declan Devine’s side are away to Sligo Rovers on 19 October, followed by home games against St Patrick’s Athletic and Finn Harps to round off their campaign.

A third-place finish would guarantee Derry a European spot.

Kelly’s winning goal ensured that Dundalk saw off Derry in normal time for the first time this season, with the previous two top-flight meetings between the sides having ended in 2-2 draws.

Declan Devine’s charges lost out after extra-time in an FAI Cup second-round tie and in a penalty shoot-out in the League Cup final.

Barry McNamee squandered the visitors’ best first-half chance when he mis-hit from close range, then late in the game Grant Gillespie smashed a drive against the bar.

Patrick Hoban forced Peter Cherrie to make a fine save with his feet from his diving header.

Rural crime in North ‘rises by a...