DERRY City and Strabane District Council has passed a motion calling for an inquiry into the troubled Owen Mor care home in Derry.

Management at the home on the city’s Culmore Road have previously apologised for the treatment of those in its care after inspectors highlighted concerns earlier this year.

A spokeswoman for Owen Mor management said they would not be commenting “at this time”.

Ms Dobbins said she was moved to put forward the motion after attending a public meeting organised by Owen Mor residents’ families.

“I went out of that meeting very upset, very upset to think it could have been one of my own,” she said.

“I am so glad the families got together and were able to sing from the one hymn sheet.”

The 81-bed facility is for people with learning difficulties, mental health issues and dementia.

It first came under the spotlight in May after an inspection.

The Regulation and Quality Improvement Authority (RQIA) inspectors highlighted concerns about staff knowledge, including nurses not following policies and procedures, as well as inadequate records about patient safety, including falls, feeding and nutrition.

After a follow-up inspection in August, the regulator stopped new patient admissions after it obtained a court order.

It has been closed to new admissions since May.

Last month, a specialist unit of the home closed due to staffing issues.

One woman, whose mother has dementia and is cared for in the home, told the BBC the families were compelled to come together.

“This is all very overwhelming, we are all trying to look out for and after each other in the midst of all of this,” she said.

“My mummy doesn’t have a voice, I have to be her voice in all of this.” 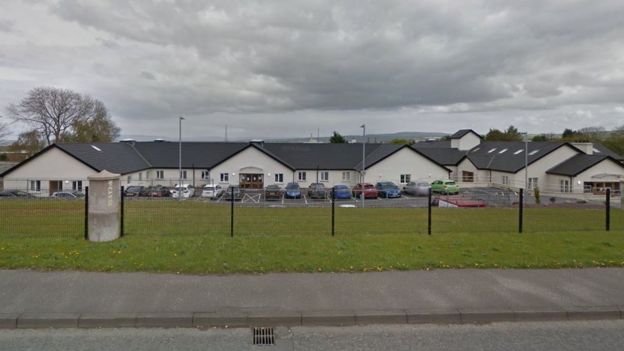 The council also agreed to ask the Western Trust to attend a future committee meeting to give an update on Owen Mor, following a proposal from the Sinn Féin councillor Sandra Duffy.

In a statement, the Western Health and Social Care trust said it did “not wish to participate in a media conversation at this time”.

The trust added: “We are keen to retain our focus on listening to and supporting families, as well as the part we play in facilitating the improvement work in Owen Mor.

“It will be our intention to link directly with the council to hear and understand fully the motion which was tabled at their council meeting.”