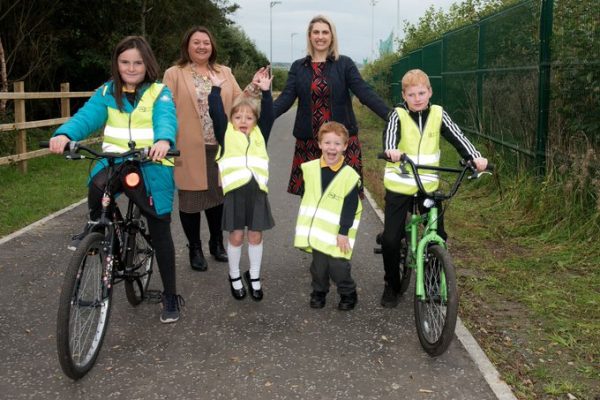 CLOONEY Greenway has officially opened providing a new one kilometre greenway linking Nelson Drive to Clooney in the Waterside.

Jointly funded by the Department for Communities and Derry City and Strabane District Council, the £460,000 project has created a new traffic free route and is another significant investment in the City’s Urban Greenway infrastructure.

The new asphalt greenway, which is comprehensively lit, has transformed the area from partially derelict inaccessible land into a space where all age groups can embrace a healthier and more active lifestyle through outdoor activities including walking, cycling and running.

Opening at the end of August, in time for the start of a new school term, the Greenway has delivered a safe travel route for school children, who attend Ebrington Primary School and Foyle College, to travel independently to and from school.

Marking the official opening of the Greenway, Pauline Campbell from the Department for Communities said: “The Clooney Greenway project has transformed the area into a safe and accessible route for users of all ages.

“It is great to see the route so well utilised by local residents and school children.

“This is another positive example of the Department’s ongoing regeneration programme in the City, and is an additional asset in the City’s outstanding Greenway Network.”

Mayor of Derry City and Strabane District Council Cllr Michaela Boyle has welcomed the opening of the Clooney Greenway saying: 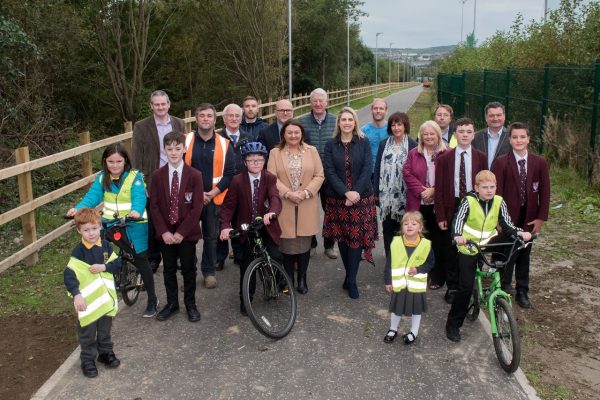 “I had the pleasure of visiting the site earlier this year to see how work was progressing and I am delighted that the work is now complete and the greenway open and ready for use by local residents and school children.

This is a hugely significant project that not only improves accessibility in the Waterside area of the city, but greatly enhances sustainable travel options for cycling and walking connectivity across the entire city and district.

“This project is a key objective set out in the Council’s Strategic Growth Plan to develop and enhance our Greenway network and improve health and well-being across our Council area.”