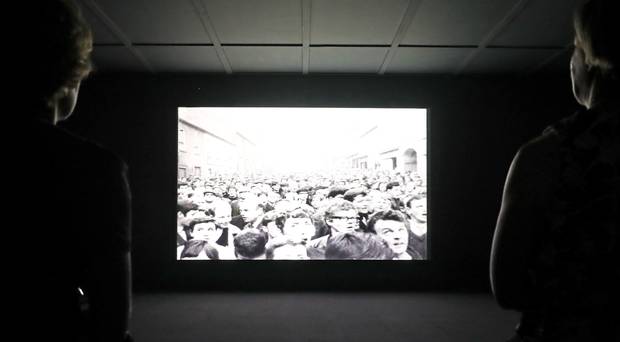 Members of the Turner Contemporary in Margate, Kent, stand amongst a piece by artist Helen Cammock

SINN Féin’s Elisha McCallion has welcomed news that an artwork focusing on the role of women in the civil rights campaign in Derry has been shortlisted for the Turner Prize.

Said the Foyle MP: “I want to congratulate artist Helen Cammock for her work, ‘The Long Note’, which focuses on the role of women in the civil rights campaign in Derry which has been shortlisted for this year’s Turner Prize.

“Women from a range of backgrounds, including republicans, played a key role in the civil rights campaign in this city and elsewhere and it is right that their contribution is recognised in this piece, which was first shown in The Void gallery in Derry last year.

“The Turner Prize is one of the most prestigious acolades in the art world and we all remember when it was hosted in Derry in 2013 and it is great to see that link with the city continuing with this nomination.

“I wish Helen Cammock and ‘The Long Note’ well and will be watching the Turner Prize with interest and hope this work on such an important issue is named as the winner.”