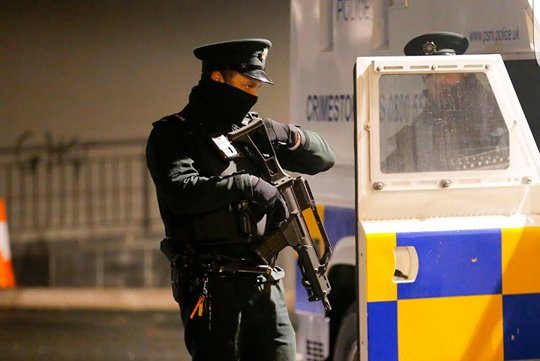 POLICE investigating a paramilitary style shooting in the Galliagh area of Derry last night have described it as “vicious and brutal”.

A senior PSNI officer in the city said there was “no justification” for the attack which has left a man in hospital with gunshot wounds to both legs.

The police believe a gang of men were involved in the attack.

Chief Inspector Bob Blemmings said: “We received a report just after 8pm that a man, aged in his thirties, had been shot in both legs on Wednesday, September 25.

“Information now suggests that the man was shot in the Brookdale Park area and that he was then able to make his way to Leafair Gardens where he received assistance.

“The injured man remains in hospital receiving treatment for his injuries.

“This has all the hallmarks of a paramilitary attack and a group of men are believed to have been involved.

“This was a vicious and brutal shooting in the early evening when families were going about their business and the fact that these gunmen thought it was acceptable to shoot this man in a built-up area where children and teenagers could be passing by shows the contempt they have for people in their community.

“There is absolutely no justification for an attack like this in our communities, and we must all work together to bring those responsible to justice and to stop this from happening to anyone else.

“If you saw anything suspicious, or if you know anything about this incident which could assist us with our investigation please pick up the phone and call detectives at Strand Road on 101 and quote reference number 2015 25/09/19.