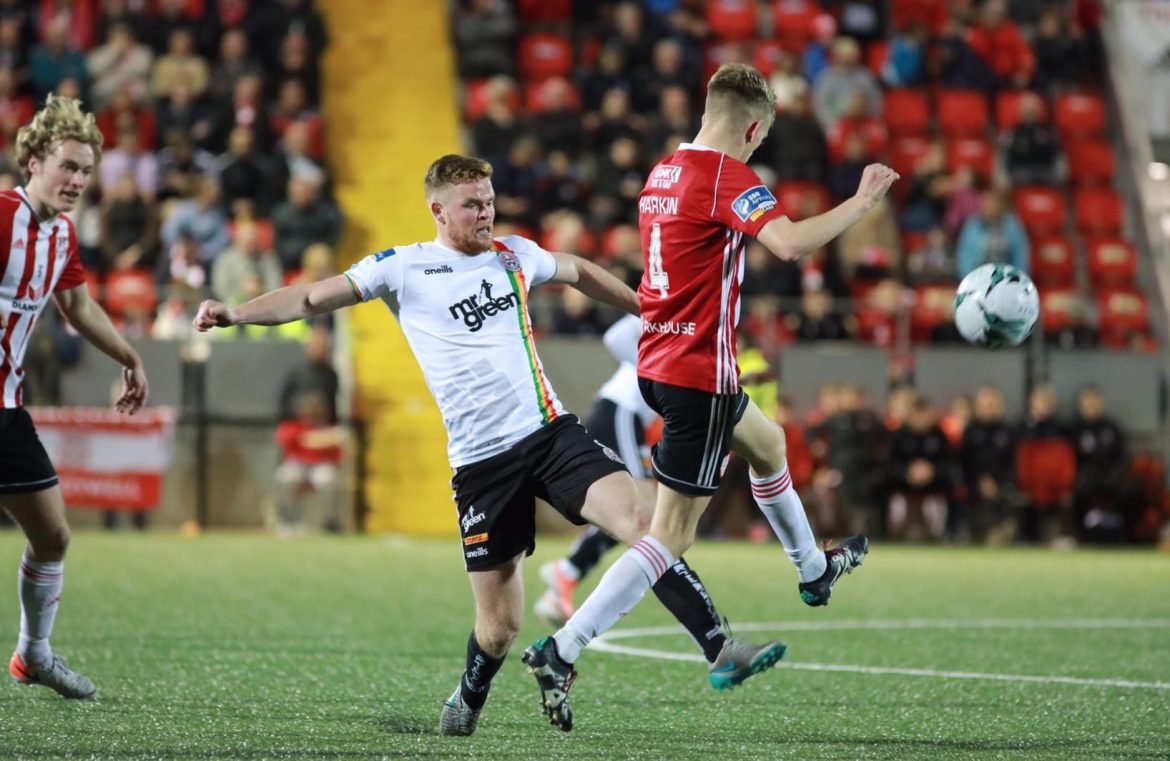 Bohemians remain in third place in the race for European football next season as they earned a hard-fought point against Derry City at the Ryan McBride Brandywell Stadium on Friday night.

Report by Shaun Keenan at

City manager Declan Devine said before the fixture that it was club’s biggest game of the season, but Derry’s lacklustre performance on the night cost them in an energetic tie.

From the onset, Devine’s outfit started at a ferocious pace and rarely relented during the 90 minutes – but the killer pass went begging all evening.

Despite the result, the Candystripes remain two points behind the Dalymount side with a game in hand.

But on the Lone Moor Road, they should have taken the lead after 21 minutes when Eoin Toal played a superb deft pass through the Bohemians ranks to David Parkhouse, but the striker couldn’t divert from close range.

Jack Malone, who fatally missed a penalty in the EA Sports Cup final on Saturday last, started the fixture in a massive show of faith from his manager.

The 19-year-old putting one on a plate for Parkhouse after 33 minutes but James Finnerty did well to deny the Sheffield United loanee from getting an effort on goal.

However, Bohemians created their own luck for large periods in the opening half as they fashioned a couple of promising moments just prior to the breakthrough – but once again they failed to take them.

Shortly after the break, Ciaron Harkin almost gave the home side the lead when his neat bicycle kick was deflected just beyond the post for a fruitless corner kick.

Parkhouse then had a golden chance to snatch the lead after 60 minutes for Derry from Harkin’s through ball, but his effort couldn’t open the scoreline.

Devine’s side, who dominated possession for large periods, were missing the final pass in the final third as they struggled to unlock the Bohs defence.

And for all of City’s dominance, it should have been Keith Long’s outfit that seized the lead when Andre Weight slipped in Luke Wade Slater.

However, the 21-year-old snatched at the effort and drove it well over the crossbar for a goal kick – golden chance for the Dublin side and by Long’s reaction, he knew it.

By the 70 minute mark, Derry City had regained control but Barry McNamee couldn’t divert beyond James Tablot as his low-driven effort when into the arms of the Gypsies goalkeeper.

City made a final push in the closing stages with other chances presenting themselves for the Foyleside team, but a draw was a fair reflection on the balance of play.

Frustration for Derry City in the race for Europe as Bohs earn hard-fought point was last modified: September 26th, 2019 by Shaun Keenan