THE case of the British Army veteran facing a murder trial over Bloody Sunday has been adjourned until later this year.

Soldier F was not in Derry Magistrates’ Court, but 28 members of the Bloody Sunday families watched proceedings from the public gallery of Court 4.

The Army veteran, now aged in his 60s, faces two counts of murdering James Wray and William McKinney and five of attempted murder.

The case against the former soldier has been adjourned until Wednesday, December 4.

Soldier F’s legal team told the court it needed time to consider evidence served on him.

His anonymity remains in place by court order.

A prosecution lawyer told the court that committal papers had been served in mid-August and that this was a complex matter involving a significant number of papers.

A lawyer for Soldier F told the court they wanted an adjournment so that the papers containing the evidence could be fully considered.

He said the defence wanted to consider what witnesses would need to appear at a later stage.

He added the defence wanted an anonymity order on Soldier F’s identity maintained.

The Solider F cipher had been used since 1972 and was not objected to by the prosecution, he said.

Granting the adjournment, Judge Barney McElholm said it would allow time for the defence to fully consider the voluminous papers in the case and prepare a witness list.

It would also allow prosecutors to ascertain their availability, he told the court.

Judge McElholm said it is important there is fairness to all concerned. 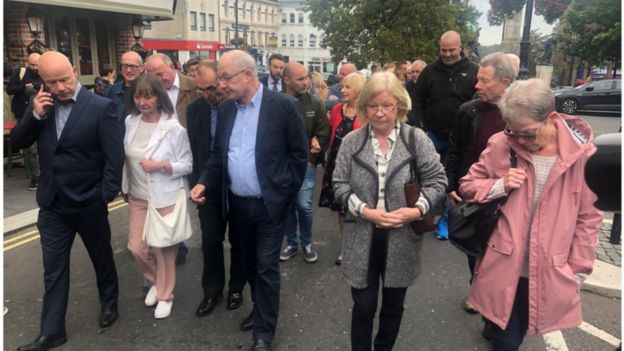 Earlier relatives of those killed and injured on Bloody Sunday walked to Derry’s court house before the court hearing.

The families marched from the city’s Diamond to the Bishop Street court prior to the start of proceedings.

Soldier F is to be charged with murdering James Wray, 22, and William McKinney, 27.

Speaking outside the court, William McKinney’s brother Mickey described the legal proceedings as a ” very significant event” in the Bloody Sunday justice campaign.

A fifth attempted murder charge – not revealed earlier this year – relates to “person or persons unknown”.