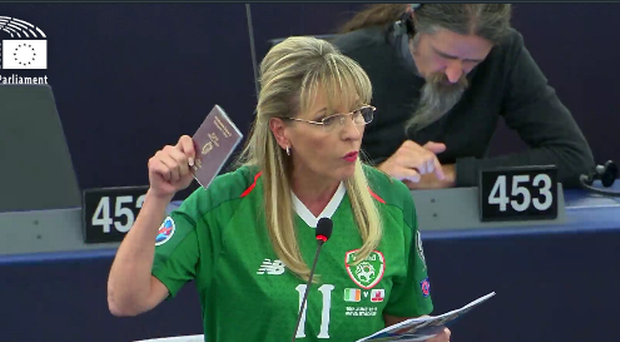 SINN Fein MEP Martina Anderson wore a Republic of Ireland football jersey given to her by James McClean in the European Parliament on Wednesday.

The jersey was worn by McClean in the Republic of Ireland’s 2-0 European Qualifying victory over Gibraltar on June 10.

Writing on Twitter Ms Anderson said that she was wearing the jersey “with pride”.

Ms Anderson held her passport in the air as she addressed the parliament during a discussion on the UK’s exit from the EU.

“My Irish passport says that it is the entitlement and birthright of everyone born on the island of Ireland to be part of the Irish nation,” she said.

“As this resolution clearly states we Irish in the North of Ireland are therefore entitled to EU citizenship where we reside.

“Whilst the backstop is essential to prevent a hardening of the border partitioning Ireland, to protect the All-Ireland economy and North-South cooperation it takes us out of the EU against our will, we in the North of Ireland voted to remain.”

Ms Anderson said there was a provision for Northern Ireland to renter the EU in the event of Irish unity.

“It is important this parliament recognises as stated in the resolution the legitimacy of whatever choice is freely exercised by the majority of the people in the North of Ireland to our right to change its status, to our right to self determination,” the Sinn Fein MEP said.

“As recognised in the Good Friday Agreement in British and Irish law, the European Council statement stated that in the event of Irish reunification all 32 counties would remain in the EU.

“The French president Macron stated that the solution to the Brexit problem is Irish reunification.

“The Good Friday Agreement provides a peaceful, democratic pathway back into the EU for the people of the North of Ireland and that should be respected by all,” added the Sinn Fein MEP.