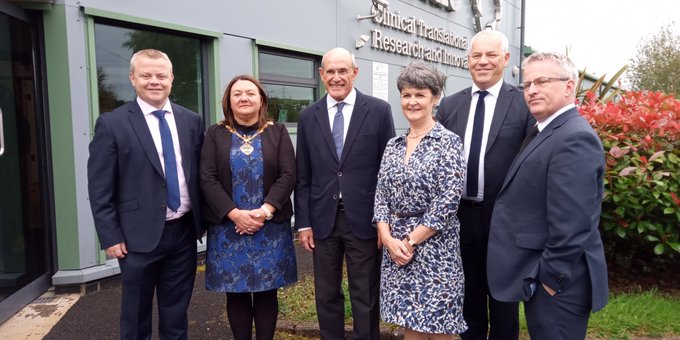 THIS year the Clinical Translational Research and Innovation Centre (C-TRIC) celebrates 10 years of a unique partnership between Derry City and Strabane District Council (DCSDC), Ulster University (UU) and the NHS through the Western Trust.

Based on the Altnagelvin Hospital site in Derry, C-TRIC have been instrumental in facilitating healthcare research, by bringing together clinicians, academic university staff and industry to achieve better outcomes for patients both locally and internationally.

Dr Aaron Peace, Chief Executive Officer for CTRIC and Director of Research and Development for the Western Trust said: “We are delighted to celebrate the 10th anniversary of CTRIC with our partners and highlight the many successes which have been achieved to date.

“Through this unique partnership approach we have delivered on many types of research study including Personalised Medicine in Cancer diagnosis and treatment, Human Factor studies for diabetic patients and Genomic studies to understand the basis of long-term medical conditions such as Multiple Sclerosis, Inflammatory Bowel Disease and Asthma.

Dr Peace continued: “C-TRIC facilitates up to 150 clinical studies per year, and to date the partners in C-TRIC have together recruited several thousand patients from our local community in the North West.

“As a result of these activities the partners in C-TRIC have facilitated economic growth through job creation with numbers increasing from approximately 15 in 2009 to almost 100 in 2019.

“C-TRIC has partnered and delivered on contract research for Lantern Pharma in the US, NovaBiomedical in the US, Genomics Medicine Ireland in Dublin and Cirdan based in Northern Ireland to name a few.

“C-TRIC has also incubated several small and medium sized businesses, with a significant number securing further investment through Invest NI, one of the original backers of C-TRIC.”

Dr Peace added: “We are very excited for the future, which will see the expansion of the C-TRIC building. facilitated by the money awarded through the City Deal initiative.

“The City Deal will allow us to build on the established C-TRIC model, thereby creating further jobs and bringing greater participation in research from our community.

Dr Anne Kilgallen, Western Trust Chief Executive and member of the C-TRIC Board said: “As one of the partners in C-TRIC the Western Trust’s Research and Development Department are delighted to celebrate this incredible milestone of clinical research and innovation.

“We are very proud of what has been achieved over the past 10 years by working in partnership with Derry City and Strabane District Council and Ulster University to support our doctors and nurses who are working on a number of clinical trials and look forward to continuing to develop further in the future which will ultimately benefit and transform the lives of our patients.”

Mayor of Derry City and Strabane District Council Cllr Michaela Boyle said: “The TMED Conference was a fantastic opportunity to showcase C-TRIC’s role in leading on life and health science research and to bring together experts from across the world to share experiences and expertise.

“The Council is very proud of its involvement with C-TRIC and the work it does in facilitating healthcare research and is committed to working with its partners to deliver centres of innovation in Personalised Medicine as part of the City Deal initiative.”

Professor Paddy Nixon, Vice-Chancellor of Ulster University commented; “The decade of C-TRIC’s sizeable impact is testament to the cross sector interdisciplinary partnership that facilitates life-changing translational and clinical research in the North West.

“Ulster University’s Northern Ireland Centre for Stratified Medicine based at C-TRIC led by Professor Tony Bjourson is a global driver of the enhancement of personalised medicine and has developed new biomarkers, diagnostics tools and data platforms that will revolutionise health care. 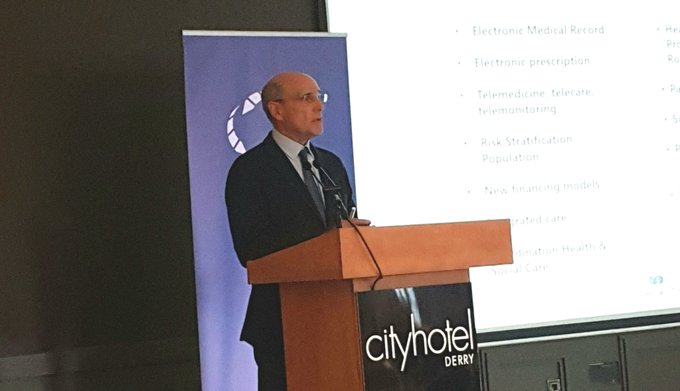 “C-TRIC’s success is a major boost to the collective ambitions of the city and region and we look forward to the development of the next ten years of the facility and the impact it will make globally while being rooted locally.“

C-TRIC held the 10th TMED Conference on 11th & 12th September 2019 in the City Hotel, Derry with the theme of “Disruptive Innovation in Healthcare”.

TMED has become a leading international meeting and this year welcomed Professor Rafael Bengoa, the author of Chronicity as well as Systems not Structures.

Professor Bengoa opened TMED10 which continues to bring together leading local and international academic and clinic researchers whilst showcasing some of the leading Industry involved in Life and Health Science.