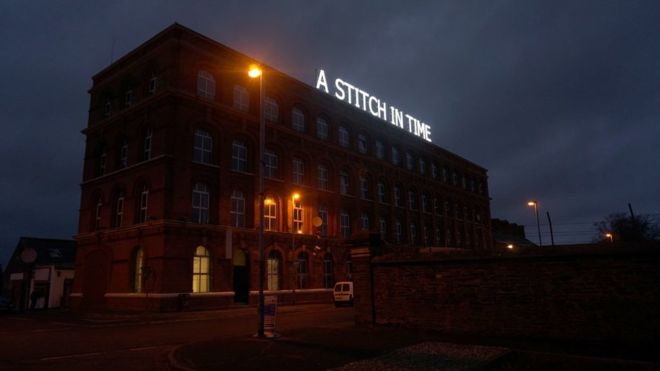 The Stitch In Time artwork has become part of the city’s skyline at night. Picture courtesy of the artist

THE artist behind a tribute to Derry’s factory girls has said he was not consulted before councillors voted to take it down.

A Stitch in Time is to be removed from the former Rosemount shirt factory and put into cold storage while councillors decide what to do with it.

They said the light installation was too costly in its current location.

Artist Tim Etchells said it was where it belonged and he was prepared to come to Derry to fight for its future.

Thousands of women were employed in the city’s shirt factories, which were the bedrock of the city’s prosperity.

Speaking on BBC Radio Foyle, Mr Etchells said he was disappointed by the council’s decision.

“It’s a strong work of art in a really amazing location, a legacy piece from the 2013 City of Culture in a part of town that doesn’t get much attention or focus,” he said.

The work was commissioned by public art organisation Artichoke as one of a number of light installations for Derry’s UK City of Culture programme.

It consists of a 22-metre long and two-metre high artwork of steel letters adorned with hundreds of LED bulbs forming the words “A Stitch in Time”.

In a statement, Derry City and Strabane District Council said it had been made aware of structural failure in the artwork in February 2019.

“An on-site assessment identified the requirement for additional recommissioning works at a cost of £12,350,” with ongoing annual costs of £6,950.”

The council added that it had an budget of £20,000 for the upkeep of more than 80 pieces of public art.

A spokesperson for Artichoke said: “We would expect to have been consulted with a view to helping find a solution to allow the installation to remain in place.”

The council said it would now be contacting Artichoke and Mr Etchells to discuss the options for the future of the installation.

“Yesterday’s decision to consider the future of the installation does not mean it will be permanently decommissioned, but that a more suitable and cost effective location can be found while the artwork is repaired,” it added.

Artist ‘not consulted’ over decision to remove Derry’s ‘Stitch in Time’ artwork was last modified: September 13th, 2019 by John