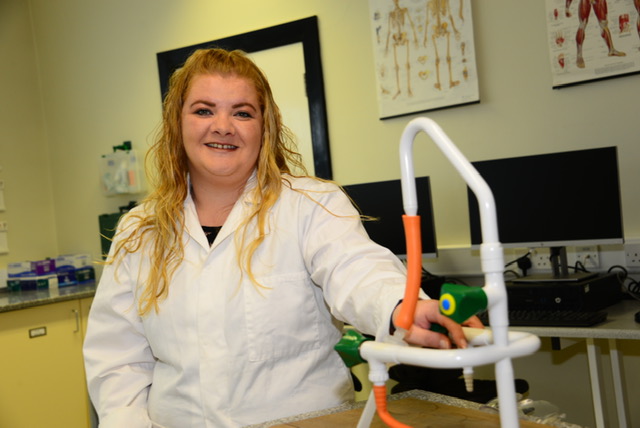 A LOCAL mum who decided to give up a career in Accountancy to study a Foundation Degree in Science at North West Regional College (NWRC), has made it through to the UK finals of the World Skills competition in the field of Laboratory Technician.

Suzanne Ramage (37) has just begun the second year of her course in Medical and Applied Science at the college’s Strand Road campus.

She’ll now travel to Birmingham in November where she’ll compete for the title of Lab Technician of the year, after coming third in the Northern Ireland heats.

“I am delighted,” said Suzanne. “My lecturer encouraged us all to put our names forward and nearly the whole class signed up.

“A few of us made it to the qualifiers and I was delighted to find out that I had made it through to the UK finals in Birmingham from November 21-23.

“The competition was very tough and involved titration, finding the concentration of an unknown, colour imaging and testing snake venom concentration.

“I’m nervous and excited about the finals. I hope I’ll do well.”

Suzanne returned to education last year, aged 37, after being inspired by her son Bronson, who was about to start post-primary school.

“I had decided to go down the Accountancy route after I left school,” she said. “When my son Bronson got his transfer test results, I told him it didn’t matter what school he went to as long as he was doing something that he enjoyed and he liked it.

“That started me thinking about the fact that I’d always enjoyed Science – but for the past 15 years, I’d been in Accountancy based jobs. I decided if I was going to do something about it, it was now or never.

“I came to NWRC and met Diane Smyth from Science and enrolled on the course. It was a massive decision for me. I had to give up my full-time job to come and study full time, but at the same time, I knew it was the right thing. I believe my time has come to do it

“It was scary coming back into the classroom again, but all the class and the tutors were amazing and I felt really at home. There were a few students on the course who were the same age as me so I never felt like the older one.

“I had already done Chemistry and Biology A-Levels and I was surprised by how much of it came back to me – even after 20 years, yes there were gaps to fill but I was surprised that I coped so well.

“After I finish my Foundation Degree I’d like to go on and do my Bio-Medical Degree and eventually work in a forensic lab or work in lab analysis.

“I want to be a good role model for my wee boy, and I believe that at any age you can achieve your dreams.”
NWRC offers a wide range of courses in Science at Strand Road and Limavady campus. For more information log on to www.nwrc.ac.uk/apply