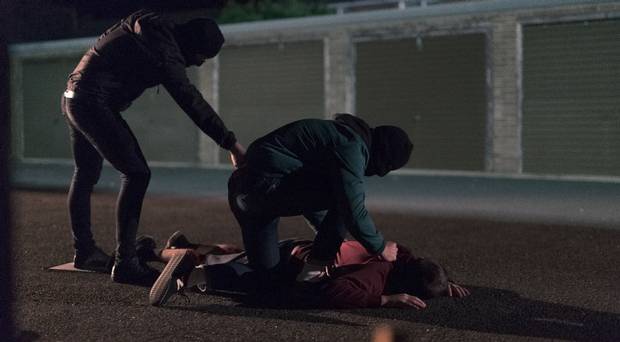 DETECTIVES in Derry are investigating the report of a paramilitary-style attack in the city last night (Friday 30th August) in which a man in his twenties was shot.

It was the third paramilitary attack in the space of two days, and the second shooting.

“The gunman attempted to fire a number of subsequent shots, but it was reported the gun jammed and the suspects fled.

“A woman who was in the house at the time was unharmed. There was no one else in the house.

“The victim was taken to hospital for treatment of the injury to his leg, which is not believed to be life threatening.

“Both suspects spoke with what has been described as local accents, and all three men wore balaclavas.

“This was a savage and brutal attack on a young man in his home, carried out by faceless cowards. Nothing gives these people the right to violate the human rights of others, and their actions should be condemned by all.

“Those who are involved in paramilitary-style attacks do not represent the interests of any community, nor do they contribute anything to it.

“They do it to try and exert influence or gain control in communities.

“I am aware of community concern following last night’s shooting as this is the third paramilitary-style attack in the city within a 48-hour period.

“Our investigations into each of these attacks are at an early stage and we are following a number of lines of enquiry, however, at this stage we don’t believe the three attacks are linked.

“I want to reassure the community we are investigating each of these attacks thoroughly and would call on anyone who has information which can help us identify those involved to pick up the phone and tell us what you know.

“Think about your own brother or sister, or son or daughter, would you want them becoming a victim of this kind of attack? If you don’t – if you want to stop this sort of behaviour – we need information.

“I want to appeal to anyone who was in the Mimosa Court area last night and saw three men acting suspiciously, or who has information which could assist our investigation, to call detectives at Strand Road on 101, quoting reference number 2164 of 30/08/19.

Man in his 20s shot in leg in brutal paramilitary attack in Derry was last modified: August 31st, 2019 by John