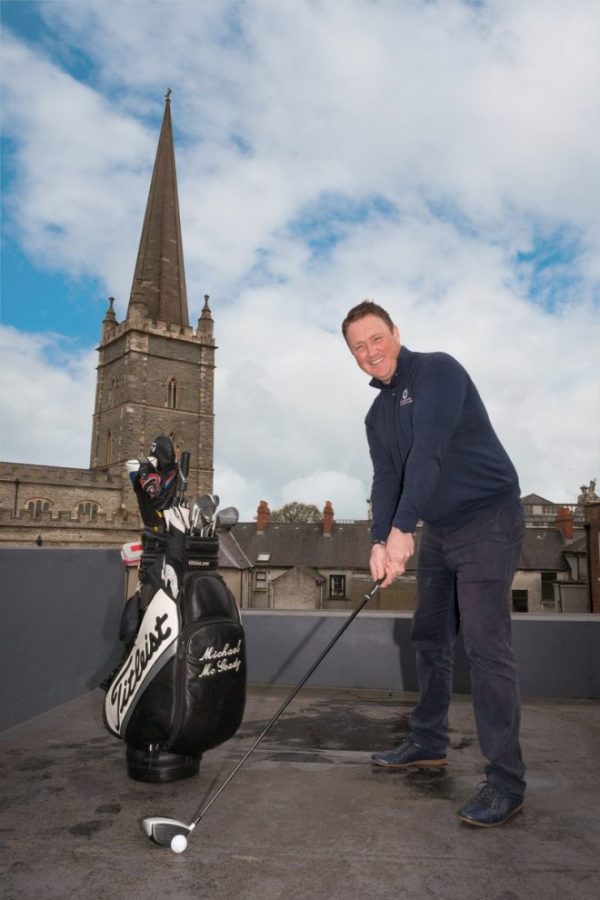 AS final preparations are being made to welcome Ireland’s leading PGA professionals to the Walled City of Derry and Strabane Pro-Am tournament this weekend, one question being asked is can Michael McGeady win for a third consecutive year?

The event on 24th and 25th August 2019, is sponsored by Bishop’s Gate Hotel and Frylite and supported by Derry City and Strabane District Council and is one of the largest on this year’s PGA calendar, hosting 52 teams and 208 golfers.

The tournament will feature many of Ireland’s top professionals, including Derry native Michael McGeady (Evolve Golf Coaching) who has made this event his own in recent years.

The 41-year-old, has three wins to his name this season and in July he qualified for the Dubai Duty Free Irish Open at Lahinch.

Another title contender will be Irish PGA Champion, Simon Thornton (Tulfarris Resort) and also Glasson professional Colm Moriarty, who will be keen to replicate his recent success at the 36-hole Cairndhu Pro-Am.

Colm posted rounds of 65/69 (-6) to beat Neil O’Briain (Old Conna) by a shot, making it his third win in four, his fourth win in six and sixth in eleven events since the start of June.

Waterville’s David Higgins along with a strong contingent of Strabane professionals including Seamus Duffy, Shaun Devenney, Brian McElhinney and Lynn McCool will also be vying to top the leader board and share in the prize pot of 15,000 euros.

Welcoming the golfers and spectators to the Walled City & Strabane Pro-Am Golf Tournament one of the joint sponsors, Ciaran O’Neill of Bishop’s Gate Hotel, said:

“This is the third year that the Pro-Am is returning to the city and with the calibre of talent taking part, spectators are guaranteed to be entertained.

“Strabane Golf Club is hosting in partnership with City of Derry and this will truly showcase what the North West has to offer in terms of golfing tourism.

“We’re delighted to be sponsoring such a positive event and we hope that the golf enthusiasts who attended the 148th Open will give their support to this tournament.”

Encouraging visitors and spectators to make the most of the opportunity to see some top-notch golf at the Walled City & Strabane Pro-Am Golf Tournament, Eamon McCay, Managing Director of Frylite, joint sponsor said:

“Royal Portrush recently hosted the 148th Open, which was a resounding success.

“Spectators thoroughly embraced the opportunity to see world class golf in a spectrum of weather.

“This tournament provides a similar experience.

“You can watch pros, enjoy the atmosphere and share in the fabulous golf tourism offering that the North West region provides.

“It is a top attraction in this summer’s sporting calendar and we’re thrilled to be involved.”

“As a Council we’re keen to continue to attract premium sporting events such as the Walled City of Derry & Strabane Pro-Am Tournament as this is a vital part of growing our Tourism offering.

“I am delighted that City of Derry Golf Club and Strabane Golf Club in my home town are coming together to host the event and that a larger number of competitors can be facilitated.

“This approach also reinforces the City and District’s reputation as a central hub for golfers, providing a challenging test of golf for both the Irish PGA Professionals and local amateurs alike.”

Michael McCumiskey, PGA in Ireland regional manager, explained the format of the tournament:

“We are now in the final countdown to this tournament which is always superbly supported. This is a 36-hole event, with each professional and their three-person team of amateurs playing a round at both City of Derry and Strabane GC.

“This is a prestigious title and the guaranteed prize pot of 15,000 euros will also heighten tension for the professionals while the amateurs battle it out alongside their pro for the team prize.”

McGeady aiming for three in a row at Walled City of Derry and Strabane Pro-Am was last modified: August 22nd, 2019 by John