A DERRY home is to remain closed to new admissions after fresh action was taken by the health regulator.

The latest move came after a follow-up inspection by regulators on Friday, August 16.

They found that concerns about health standards raised in May had not been addressed.

Residents and families have been informed of the latest move.

The Regulation Quality Improvement Authority (RQIA) said it will “continue to monitor this service closely to secure the necessary improvements”.

BBC News NI has reported that the home’s owners said the decision was made on Friday after a follow-up inspection by the RQIA.

The RQIA said it had particular concerns about “staff knowledge, competency and understanding of safe practice in the management of medicines”.

It added: “We also found evidence of a lack of availability and missed doses of medicines.

“These presented a serious risk to the health and wellbeing of vulnerable people, including patients living with dementia, who may be unable to express their needs.”

The RQIA said it had been successful in “obtaining an urgent order to place conditions on Owen Mor Care Centre with immediate effect”.

closing the home to further admissions;

assessing competency and capabilities of registered nurses in the safe administration of medicines;
strengthening of management.

Speaking on behalf of the owners, Dr Brendan McDonald said they were working with an independent consultant to put in place a plan to address concerns.

“While many of the compliance issues and shortcomings identified in the previous inspection have been successfully addressed, we are deeply disappointed that it was not been possible to comply with all standards within the period assigned,” he added.

Dr McDonald said they would be seeking the agreement of regulators and the support of the Western Trust for new arrangements.

“We will be working to fully implement the changes needed so that all compliance requirements are met.”

In May, it was reported that the regulator had issued failure to comply notices on the home.

The notices mentioned concerns about staff knowledge, including nurses not following policies and procedures, as well as inadequate records about areas of patient safety such as falls, feeding and nutrition.

In May, Derry Daily reported how Nicola Brown’s 25-year-old son Matthew received respite care at Owen Mor once a month. 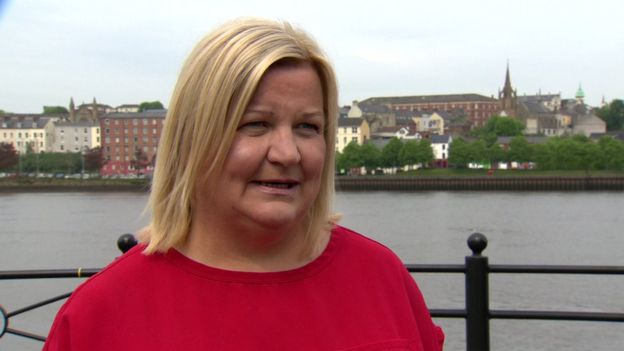 Nicola Brown, whose son Matthew goes to Owen Mor for respite, said her family have had to cancel plans because of the situation

She said that up then they’d been very happy with his treatment at the home.

“Myself and most parents are angry, because we thought that, ‘well our children are going in there and they are vulnerable children’.

“Basically we don’t hear anything back from the child because Matthew doesn’t talk so we have to listen to what the people in Owen Mor are saying.

“We thought the staffing needs were perfect.”

A spokesperson for Owen Mor confirmed they accepted the failure to comply notices from RQIA and Owen Mor is “assiduously working in tandem with the Western Trust to “achieve full compliance within six weeks as agreed by the RQIA”.

The owners of the home have apologised “to our residents and their families” about the developments.

“At Owen Mor our priority is not only to meet but to exceed the standards required of nursing homes,” their statement read.

“We apologise to our residents and their families that, on this occasion, we have fallen short of these.

“We are confident that our management initiative will deliver the changes needed to ensure that we are providing the standard of care and comfort which has been the hallmark of our long service.”