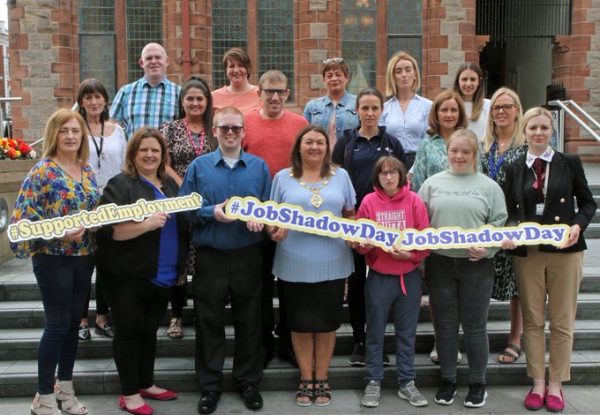 MAYOR of Derry City and Strabane District Council, Councillor Michaela Boyle, hosted a reception this week to acknowledge all those who took part in Job Shadow Day, an initiative that encourages employers to open their workplaces to people with disabilities.

Job Shadow Day took place on 16 May and was co-ordinated by the Northern Ireland Union of Supported Employment.

Over 60 employers (private, public and voluntary sector organisations) across Northern Ireland took part in the initiative with over 130 persons with varying disabilities participating.

In the Derry City and Strabane District Council area six employers engaged with the scheme, with 10 people taking part in the initiative.

Derry City and Strabane District Council is one local employer that sees the benefits of participating in Job Shadow Day.

Mayor, Cllr Boyle, said she felt it was important to acknowledge the success of Job Shadow Day in Derry and Strabane by hosting a Mayoral reception for all those who participated.

“I am hugely supportive of initiatives that promote inclusiveness and diversity.

“Job Shadow Day is an excellent way of giving people with disabilities the chance to get first-hand experience of the world of work and to learn the skills required to succeed in the workplace.

“It’s a great honour for me to host a reception for employers, employees and participants in the Job Shadow Day initiative and I look forward to more companies coming on board next year,” she added.