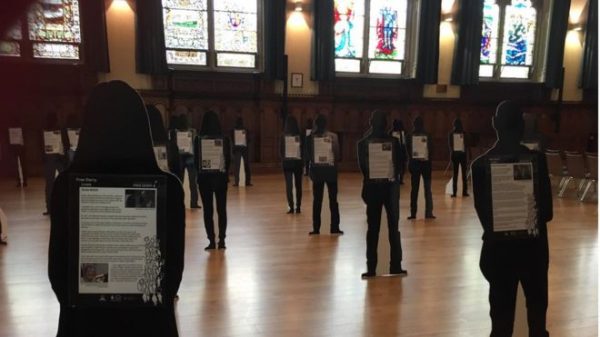 Exhibition to mark 50th anniversary of the Battle of the Bogside

Free Derry Lives features an array of cut out figures, each documenting an individual’s story from the time

A NEW exhibition marking fifty years since the Battle of the Bogside in Londonderry has opened in the city.

Free Derry Lives, curated by the Bloody Sunday Trust, aims to specifically remember those who “didn’t make the history books”.

Organisers say it documents the role of the people of the Bogside in a monumental time in the city’s history.

It runs at the city’s Guildhall until Thursday, before moving to a permanent home in the Museum of Free Derry.

Maeve McLaughlin from the Bloody Sunday Trust says each story comes from the “ordinary people living in extraordinary times.”

The Battle of the Bogside in August 1969 is regarded as one of the first major confrontations in what was to become the Troubles.

Three days of rising tensions between the nationalist residents of the Bogside in Derry and the RUC (Royal Ulster Constabulary) over an Apprentice Boys parade brought British troops on to the streets of Northern Ireland for the first time.

After three days of fighting, a truce was called and the barricades surrounding the Bogside were replaced by a white line.

“It was a time when effectively over three days and two nights the Bogisde became Free Derry,” Ms McLaughlin said.

“This exhibition looks at just that, at the ordinary people living in extraordinary times.”

It has been compiled from contributions from those who were there or from relatives.

Ms McLaughlin said among those to feature are Annie McCourt.

“Annie’s whole life was about resistance,” she said.

“She was affectionately known as Annie ‘Binlid’. People of a certain age will recollect the history of the bin lid as a symbol of resistance and how it was used to alert communities when British army and police were coming into areas.”

The exhibition will continue to evolve as more contributors come forward, Ms McLaughlin added, and as it moves to its permanent museum home.

The mayor of Derry Michaela Boyle said the exhibition provided a “unique opportunity for those who played a role and participated in the civil rights era regardless of how big or small that part was to tell their story.”