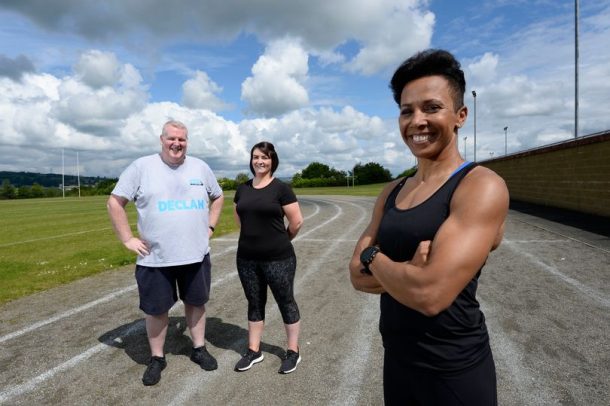 Dame Kelly Holmes puts Declan Thompson and Joanne Nash through their paces for first ever parkrun in Strabane, Co Tyrone

HOT on the heels of completing her first ever Parkrun during the recently broadcast BBC documentary ‘The Power of Parkrun’, Joanne Nash has set her sights on a new challenge – the 2019 Waterside Half Marathon.

Parkruns are free weekly timed 5k runs hosted throughout the UK and Ireland on Saturday mornings and the documentary explored the growth of the phenomenon and the associated mental health benefits.

Joanne was one of two local runners coached by the programme’s host and double Olympic gold medal winner Dame Kelly Holmes in preparation for Strabane’s inaugural Parkrun event in June.

She will take on the 13.1 mile course on Sunday September 1st in aid of local mental health and suicide awareness charity Me4Mental.

“Dame Kelly told us during the training that you should always set another goal, so having done the 5k I wanted to move onto the next one,” Joanne explained.

“The Waterside Half Marathon is a big event in Derry so it was the ideal next challenge for me to try and do it in my home town.

“I know how hard it’s going to be but I’m learning to push through when I get uncomfortable and to get to the other side.”

Having experienced her own issues with anxiety and depression following the death of both her parents, Joanne has reaped the health and well-being benefits of regular physical exercise.

“A friend texted me in May and said Dame Kelly Holmes was looking for volunteers to mentor ahead of the first ever Parkrun in Strabane in June,” she explained.

“It was a once in a lifetime opportunity to work with someone who has achieved everything in athletics so I decided to give it a go.

“I had suffered from mental health issues from the age of 18 or 19 and I thought it might be another tool to help my well-being and it was a chance to maybe lose some weight as well.

“Both my parents have passed away and Dame Kelly has lost her mother so we had something in common right away when we met for a coffee to chat about what we wanted to achieve.

“Despite her accolades she was so down to earth and easy to work with, we did a session at the Melvin Sports Centre in Strabane where she showed us some drills and looked at our form and gave us some tips like how to use our arms when running.”

The high of completing her first Parkrun with her friend Lisa Porter left the Derry girls hungry for their next challenge and they are now past the half way point in their training for the Waterside event.

“I’d started training for the Half Marathon two years ago and got up to seven miles but I let my head win and threw in the towel at that,” she recalled. 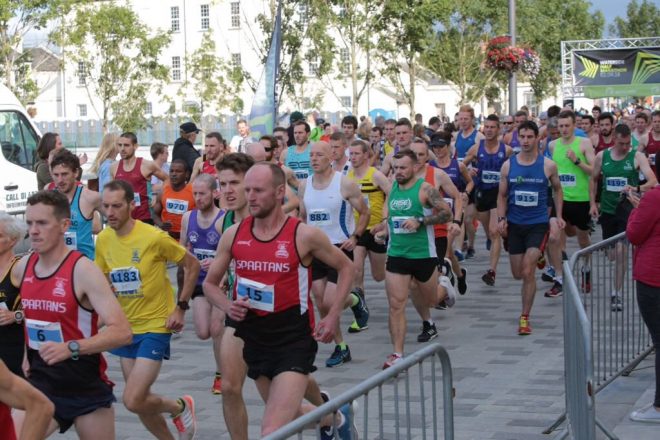 “I had been running with a local running club a couple of years ago, the coaches were amazing and so was the support of all the runners but I was always giving myself a hard time about being the last one and it actually started triggering my anxiety as I felt I was a hindrance to the group.

“My friend Lisa wanted to do the half as well so we agreed to do it together and we’re working on a 10 week plan we found on the Runners’ World website.

“Running clubs play a brilliant role in promoting and facilitating the sport locally but training with Lisa is ideal for me as we can meet at a time that suits and go at our own pace.

“I’m trying to remind myself that it doesn’t matter how slow I am, the fact is I’m doing it and we all get the same medal at the end of the day.

“My target is just to complete it, my pace isn’t great, I’m down to 12 minute miles but I don’t want to put myself under unnecessary pressure and just to reach the finish line at St Columb’s Park running track will be enough for me.”

With a thriving Parkrun in Derry and Strabane and active running clubs all over the North West, there have never been more people involved in running locally and Joanne encouraged as many people as possible to join the growing running fraternity.

“There’s a great spirit among runners in Derry, when you’re out on the roads other runners greet you and I love the positivity that brings.

“I’d recommend it to anyone, even to do a Couch to 5k, you can take it is slowly as you want by walking or running and just slowly build it up at a pace that suits you.”

You can donate to Joanne’s Half Marathon fund raising campaign in aid of local mental health and suicide awareness charity Me4Mental at justgiving.com/crowdfunding/joanne-nashwhm

The Waterside Half Marathon takes place on Sunday September 1st beginning at the parade ground in Ebrington Square and finishing on the running track at the nearby St Columb’s Park.

The scenic urban route takes in both sides of the River Foyle, passing many of the city’s historic landmarks including its famous walls and the Guildhall before crossing the iconic Peace Bridge and onto the finish.

Registration for the Waterside Half Marathon is open now at www.derrystrabane.com/whm where participants can register in the running, wheelchair and three person relay team categories.

Entry for the race is strictly capped at 2,300 and with over half the places already taken participants are advised to register now to avoid disappointment.

The closing date for registrations is Monday August 12th 2019.

The race is open to athletes of all levels and abilities and further information is available by e mailing halfmarathon@derrystrabane.com or calling 028 71 253 253.