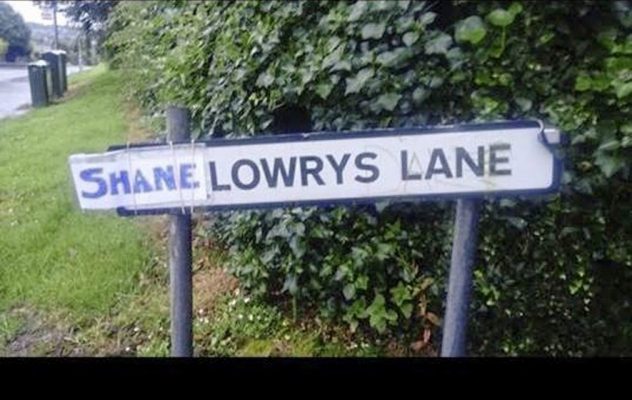 FANS of Irish champion golfer Shane Lowry lost not time in re-naming a Derry road to honour his historic Open victory on Sunday.

Within hours of his tournament-winning putt at Portrush’s Dunluce course, supporters added a make-shift addition to signs for Lowry’s Lane in the Glen area.

SDLP councillor for the area, Shauna Cussack, who lives in the Lowry’s Lane area, moved quickly to highlight the Irish man’s success.

Ms Cussack suggested the Offaly man’s success might even push property prices up in the area.

She posted on Facebook: “Maybe a good time to sell the house? Give us a buzz Shane!.”

After celebrating his historic win in Dublin on Monday, Lowry will be heading back to his home town of Clara in Co Offaly this evening to show off the famous Claret Jug.

Around 12,000 people are expected to gather at The Green in Clara to welcome home their famous son.

Already, his army of fans and friends have given the trophy a new name – they are now calling it the ‘Clara Jug’!