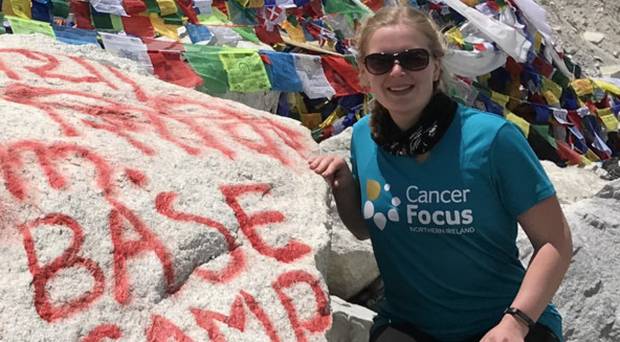 ZARA Brown had no sooner finished her final degree exams when she was off climbing 5,565m to Everest base camp.

The Co Derry woman completed the climb in memory of her great-aunt Dorothy Thompson as she raised money for Cancer Focus Northern Ireland.

Zara Brown (23), from Claudy, took up the gruelling challenge of climbing to the base camp in Nepal and raised almost £2,500 for the charity.

Mount Everest is situated on the border of Nepal and Tibet in the Mahalangur section of the Himalayan Mountains.

It is the highest mountain in the world and its peak is 8,847m above sea level.

The newly-graduated mechanical engineer took on the task of reaching the base straight after she finished her final-year exams.

This group has since been renamed the Claudy Cancer Focus NI fundraising group.

Sadly, she passed away five-years ago, aged 69, from cancer.

Since her death, Zara has strived to follow in her great-aunt’s footsteps.

Zara said: “It was a hard enough climb, but we met so many lovely people and the scenery was amazing.

“Next, I’m planning to climb the highest peaks in England, Scotland and Wales.

“I’d like to say a big thank you to everyone who made a donation to my trek.

“All the money I raised stays in Northern Ireland to help local cancer patients and their families.”

Zara credits her great-aunt for her inspiration and involvement in the charity.

She said: “She was a very special person, who taught me many life lessons and she is the source of my drive and determination for many things I do.

“When I was growing up, I went along to many coffee mornings and fundraisers and made tea for people taking part in vintage rallies. My job, along with my sister, Lynsey, was counting the money.”

Zara took to Facebook at the end of June to thank everyone for their donations and their support.

Since returning from Nepal, she said: “I would go back tomorrow.

“I’ve always enjoyed the Duke of Edinburgh Award at school, but I’d never done anything like this before.”