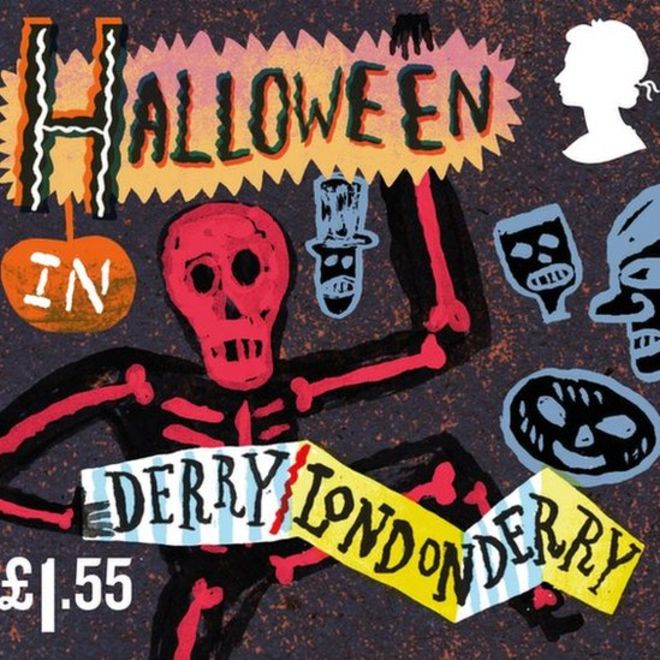 Eight colourful stamps have been released to capture the spirit of well known events and festivals that take place across the UK.

Tens of thousands of people line the streets of Derry every year for the Halloween parade and fireworks display.

Philip Parker, from Royal Mail, said: “Communities throughout the UK have been coming together for centuries to share distinctive traditions and mark key dates of the year.

“These customs continue to evolve, and our new stamps celebrate their diversity and the communities that maintain them.”

On Tuesday, members of Derry City and Strabane District Council’s Business and Culture Committee gave their approval for officers to proceed with appointing large-scale animation pieces such as Sauras and Museum of the Moon for this year’s Halloween Festival celebrations.

The recommendation was made following the presentation of a Tourism Northern Ireland commissioned evaluation report on the very positive benefits of the 2018 Halloween festival.

The report outlined the total number of attendees at the Derry Halloween event as being 99,573 with 197,723 spectators making multiple visits on various days. 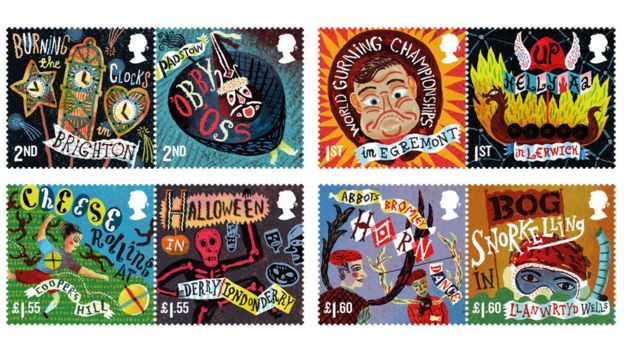 The study, which was carried out over four of the seven days of the festival, showed that 50% of spectators were from the Derry City and Strabane District Council area, 27% from other parts of Northern Ireland and 23% from outside Northern Ireland.

Aeidin McCarter, Head of Culture with Derry City and Strabane District Council, presenting the report said the Halloween festival continues to grow and remains one of the largest Halloween festivals in Europe and the latest in Ireland and the UK with visitor numbers doubling over the past three years in excess of 100,000.

Last year the Halloween programme across the city and district enjoyed its biggest ever programme of events with over 2,000 participants taking part in over 100 events in over 40 venues.

Attendance and participation at all events programmed were up on previous years with up to 5,000 attending activities and fireworks in Strabane.

A key element of the findings of the report is the economic impact analysis shows that Derry Halloween 2018 generated £812,646 to the Northern Ireland economy, representing a positive return of £8.55 for every £1 of the £95,000 invested by Tourism NI.

Aeidin McCarter further explained that when taking account of the £1,192,385 spent by NI residents from outside the host Council area, the tourism impact of Derry Halloween was £2,005,031, representing a significant positive return of £21.11 for every £1 invested by Tourism NI.

The report also shows the positive impact the festival has on accommodation provision with the total number of unsubsidised commercial bed-nights by Derry Halloween festival attendees as 11,219, which in turn generated a total of £419,090 to the accommodation sector in Northern Ireland.

Including the event organiser’s expenditure, the total benefit to Northern Ireland based businesses, ie the revenue received by NI based businesses and traders as a direct result of Derry Halloween 2018, was £3,200,723.

Ms McCarter added that the event attracted extensive media coverage and secured awards such as the Best Event and Festival Experience at the NI Tourism Awards 2018 and the Best International Experience in 2019.

The event secured €6.4m in PR value and 2.9m digital impressions across its social media platforms in addition to over 333,000 web page hits.

Looking ahead to the 2019 Derry Halloween, the Council’s Head of Culture said this year’s Festival will commence with the Castlederg Apple Fair on 25 October and continue right through to 01 November across the entire city and district, with the main Halloween activities taking place on Thursday 31 October.

Among the highlights of the programme will be the Awakening of the Walls, the little Horrors Family programme, Tours n Trails, Samhain Sessions, street animation, a Carnival Parade and Fireworks.

The theme is “The Other World Awakens” acknowledges the festival’s Celtic traditions and stories of the historic 400-year-old Walls.

Other animation and events secured to date include the return of the hugely popular Sauras walkabout acts and the lunar surface imagery, the Museum of the Moon.

A key attraction this year will be LegenDerry Halloween Food Village.

This will bring significant uplift to the Food and drink offering as part of Halloween and supporting the ambition of Taste The Island which is a collaborative initiative developed in partnership with Tourism NI, Tourism Ireland and Failte Ireland. 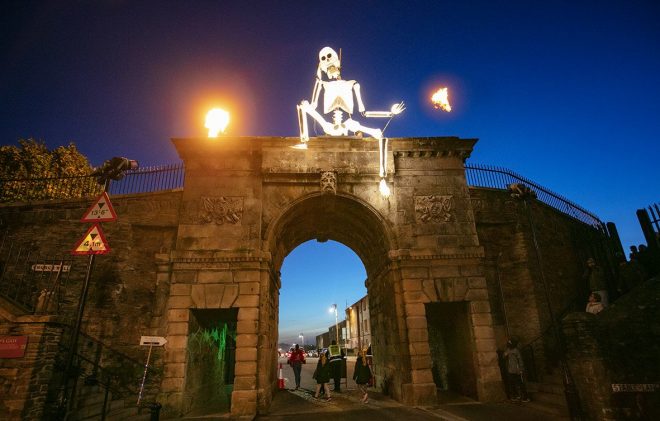 It is an annual celebration of our food and drink which seeks to create an awareness of the strength and richness of our food culture.

The marketing and promotion of 2019 Halloween has already commenced as part of an extensive national and international campaign to raise awareness of the festival globally.

Referencing the recent consultation process carried out to consider moving the Halloween celebrations in Strabane from mid-week to a weekend date to assist in generating business for the business community in the town, the majority of respondents 71% were not in favour of the move.

Aeidin McCarter said officers will continue to work with businesses and the community in Strabane to deliver a fireworks event on 31 October as planned.

Members of the committee voted in favour of the recommendations for officers to progress with the procurement arrangements for the Halloween festivities for 2019.