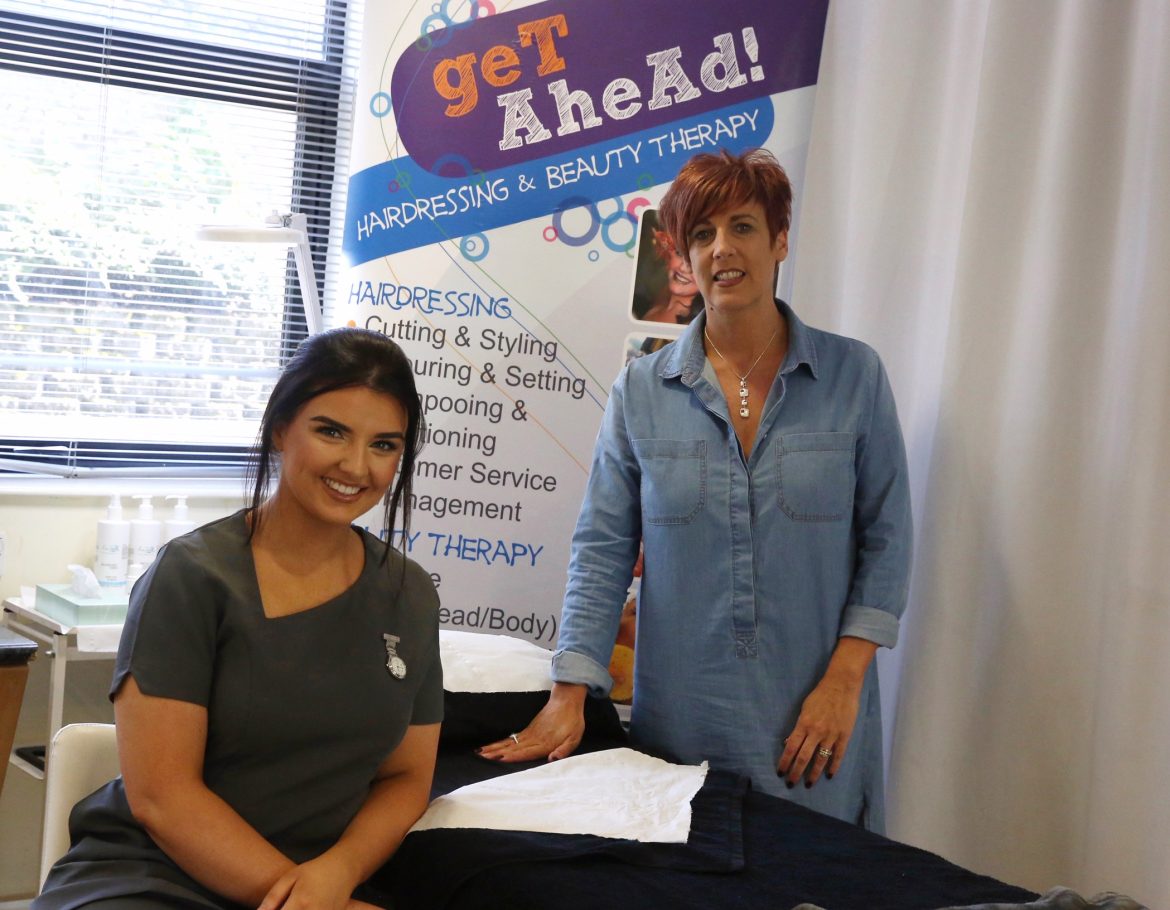 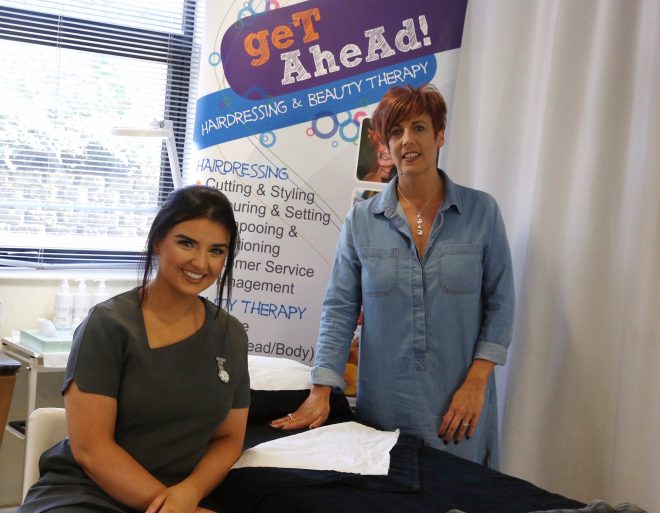 Nuala Mullan, who was placed first in the Northern Ireland Beauty Therapy heats of the Worldskills competition, with NWRC Curriculum Manager at Limavady Campus Cara Hegarty.

TWO North West Regional College students have been named the region’s top Hairdressing and Beauty Therapy students after being placed first in the Northern Ireland heats of the Worldskills competition.

Nuala Mullan, who has just completed the Level 3 Diploma in Beauty Therapy, and Nailah Akhtar, who completed level 2 Diploma in Hair at Limavady Campus, now face an anxious wait to find out if they have made it into the top 8 in the UK, to qualify for the Worldskills finals in Birmingham in September.

Nuala, who has plans to move to Australia later this year where she has secured a job as a make-up artist with a global touring film company, said she was ecstatic to come first in the North of Ireland.

She added: “The competition was extremely tough as I had just one hour and 40 minutes to carry out a back massage, mini facial, evening make-up and lashes and a French manicure.

“It was a fantastic experience. I am so thankful for all the help I’ve received from my lecturers at NWRC Limavady, they’ve given me so much confidence in my ability.

“Originally I had chosen to study Engineering at University, but I changed my mind and went for Beauty Therapy as I knew it was the career that would suit me.

“My mum is a former beauty student at NWRC Limavady and I’ve always loved make up so this was the perfect career for me.

“Currently I’m working at my own salon ‘Head to Toe’ in Castlerock, and I’m thankful for the training and skills I’ve received at NWRC, learning in the industry standard salons which have prepared me well for the world of work.”

Nailah, plans to return to college in September to continue with her Hairdressing and progress on to complete her NVQ level 3 Diploma in Hairdressing.

She added: “It was a tough long day, we had to compete in three different events, up styling, gents hairdressing and then the final competition was the cut and colour which was over 3 hours long, but it was worth all the stress and worry to come out on top”

Cara Hegarty, Curriculum Manager, at NWRC Limavady said: “The college is absolutely delighted that two of our students have placed first in the Beauty Practitioner and Hairdressing categories, especially as this is the first year that we have competed in Beauty at Worldkskills, and the second time for Hairdressing.

“This is a fantastic achievement and recognition of the high standard of learning that we continue to deliver at NWRC Limavady.

“I would like to congratulate Nuala and Nailah on their success, and wish them the best as they wait to find out if they have qualified for the World Skills finals in Birmingham.“

The college offers a number of courses in Hairdressing and Beauty Therapy up to Level 3.