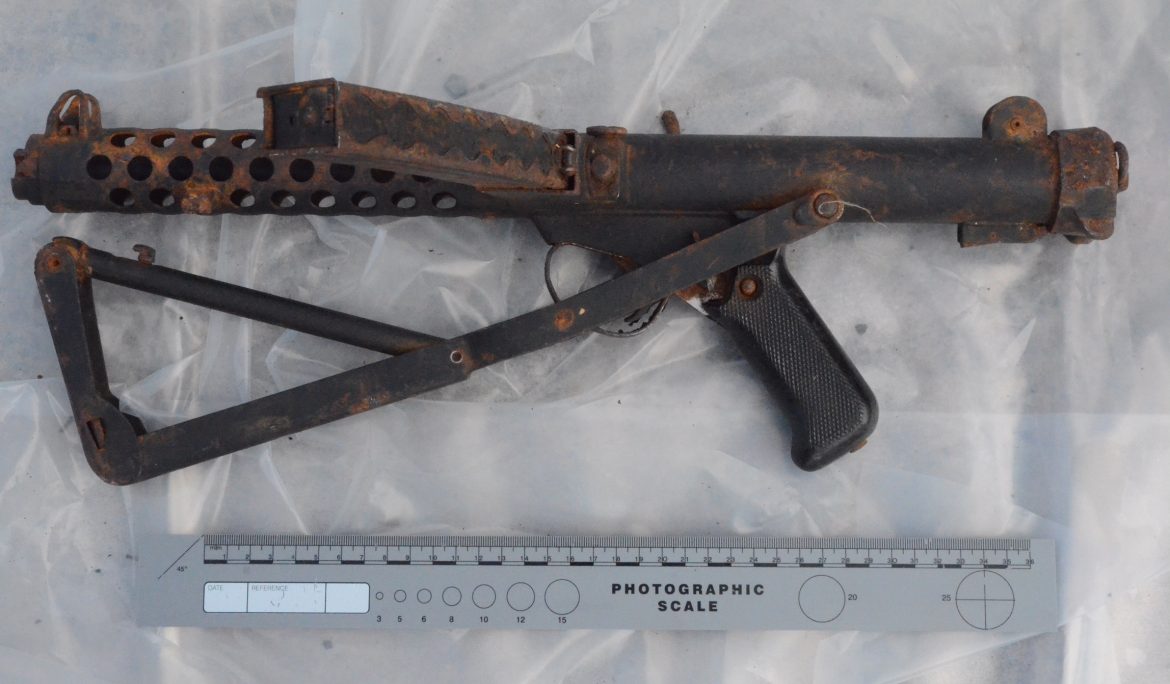 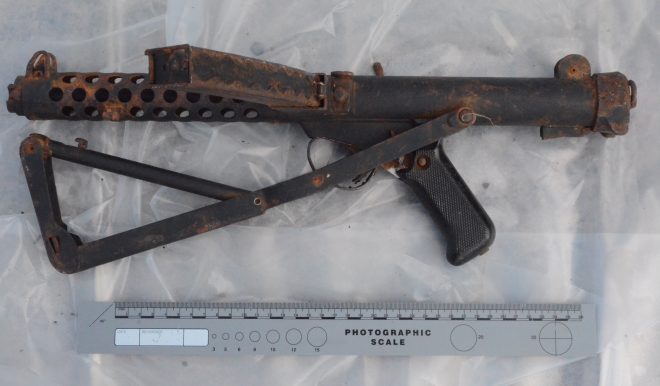 A submachine gun seized during the major search operation in Derry

DETECTIVES from the PSNI’s Organised Crime Unit, supported by local police officers in the Derry area, have carried out a major search operation in the city in the fight against paramilitary crime.

Two assault rifles and one submachine gun have been seized, in relation to the investigation into INLA criminality.

In total, seven searches were carried out under the Terrorism Act and PSNI were supported by HMRC officers during the operation.

As well as the weapons, a quantity of Class B drugs, counterfeit clothing and DVDs, approximately £13,000 in cash, phones, tablets, documentation, over 7000 illicit cigarettes and a quantity of hand-rolling tobacco (HRT) were also seized.

Two men aged 44 and 43 were also arrested and are currently in police custody assisting detectives with their enquiries.

A further search was carried out in relation to the investigation in Derry area led by HMRC and supported by PSNI.

District Commander, Superintendent Gordon McCalmont said: “The INLA in Derry/Londonderry and Strabane claim to be the protectors of their community, but the reality is that they use violence and intimidation to control and exploit those communities.

“Weapons like the ones seized today pose a threat to everyone and anyone who brings guns onto our streets does not care about our community.

“When a gun is fired there is no guarantee where the bullet could end up or who it could harm and the people of our city have seen the damage and devastation that this can cause.

“Many INLA members are also involved in a range of criminal money-making rackets including the supply of controlled drugs, blackmail, extortion and money laundering.

“Despite what they say, it is clear that they do not mind drug dealers operating in the local area– as long as they’re getting their ‘cut’ from the profits.

“The INLA are hypocrites allowing those supplying illegal drugs to continue ruining the lives of those with addiction so long as they pay up – and if they don’t they are threatened with severe violence and murder. Local families suffer at the expense of INLA members lining their pockets.

“Furthermore, the INLA are heavily involved in the supply of counterfeit goods and illicit cigarettes and whilst the supply of these items may seem like victimless crimes, profits made from the sale of these items can help to fund INLA terrorism and criminality which brings misery and harm to the local community.

“Through working closely with HMRC, An Garda Siochana and other partners, we will continue to tackle Paramilitarism. We know that the communities most affected by these groups support our ongoing efforts.

“I would appeal for anyone with information regarding criminality by paramilitary organisations to contact police on 101. Alternatively, information can also be provided to the independent charity Crimestoppers on 0800 555 111 which is 100% anonymous and gives people the power to speak up and stop crime.”