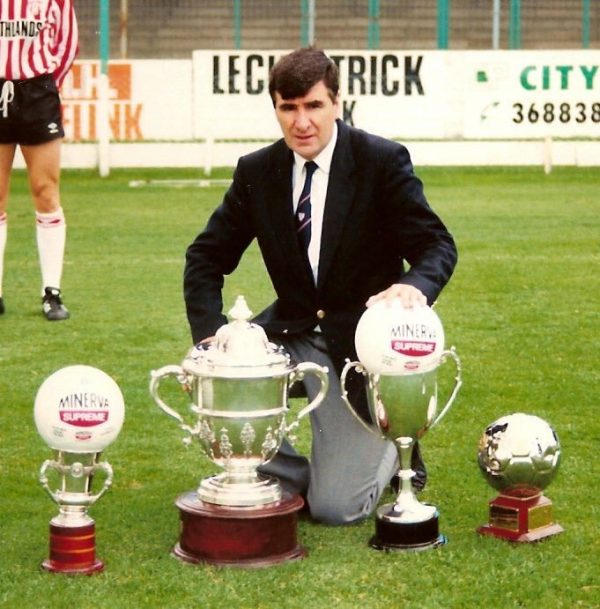 THE former Derry City football manager who delivered the Holy Grail of an Irish domestic treble is to be given the freedom of his home city.

Jim McLaughlin (78) will be conferred with the Freedom of the City at Derry’s Guildhall tonight, Wednesday, May 29, followed by a gala dinner.

As a freeman of the city, he joins an elite group of just 40 previous recipients.

In a life devoted to football, Mr McLaughlin won fame both as a player and later as a manager.

As a player, he started life with Derry City before moving to England at the age of 17.

He played for Birmingham City, Shrewbury Town and Peterborough during 14 seasons, scoring 26 league goals in 456 appearances.

On an international level, he was capped 12 times by Northern Ireland, scoring six goals, twice against England in 1964.

As a manager, he reached the pinnacle of his career, winning the Irish treble of League, League Cup and FAI Cup in 1989.

His record as the only manager to do so still remains stands.

Independent councillor, Sean Carr who proposed that he be given the freedom of the city, said it was right that Derry honoured Mr McLaughlin.

Mr Carr said: “He is one of Derry’s most successful sons.

“No matter where he plied his trade, Jim’s heart was always in Derry.

“His passion for Derry made us the only team to win the treble.”

Regarded as one of the best managers ever in the League of Ireland, ‘Macker’s’ record of eight league titles, seven FAI Cups and four League Cups during spells with Dundalk, Shamrock Rovers and Derry City still tands the test of time.

Freedom of the City for legendary treble-winning Derry manager Jim McLaughlin was last modified: May 29th, 2019 by John