FAMILY and friends will fondly remember journalist Lyra McKee in Derry this evening, Friday, May 17, to mark one month since she was brutally murdered by the New IRA.

Fr Joe Gormley, the parish priest of St Mary’s in Creggan who administered the last rites to Lyra at Altnagelvin Hospital, will celebrate a Month’s Mind Mass.

This will be followed by a ‘Love for Lyra’ gathering at the Peace Flame near the Guildhall.

One of Ms McKee’s closest friends in Derry, Kathleen Bradley,said they wanted to give everyone in the city the chance to remember her.

“The Love for Lyra gathering will be an opportunity for the wider city to join with us, her friends, to come together to show Sara, Lyra’s partner, and her family that they have the love of the people of this city,” she said.

“This will be an opportunity for people to write messages of love and support and these messages will be presented to Sara to show her she isn’t on her own and that the whole city is behind her and that Lyra hasn’t been forgotten.

“We will also use the opportunity to call once again on anyone who has information about Lyra’s murder to go to the police.

“The Month’s Mind Mass this evening at 7.30 pm and the Love for Lyra event will be at 8.30 pm because we know not everyone is religious.

“So this is a way anyone who wants to show their love and support can come to the Peace Garden.

“Lyra was all about being inclusive at all times, so this is just following her lead allowing people to be part of remembering her a month after we lost her.

“It is still so hard for us to believe Lyra isn’t with us, we keep expecting her to walk in the door.

“I think it won’t really hit us until the next birthday celebration because she won’t be there.”

Meanwhile, the book of condolence opened in Derry in memory of Lyra by the mayor of Derry City and Strabane District Council Councillor John Boyle at the Guildhall closed on Wednesday. 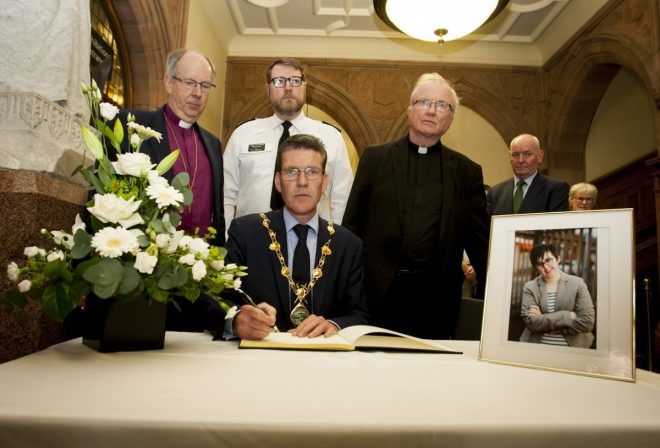 The Mayor, who was a personal friend of Lyra’s, will present the book of condolence to her still heartbroken family one month after a New IRA bullet struck her in the head, ending a promising life as a writer and author.

Detectives have arrested three people – a woman and two male teenagers – over her murder on Thursday, April 18, but later released them unconditionally.

Last Saturday, two men appeared at Derry Magistrates’ Court charged in connection with rioting in Creggan on the night Lyra was shot dead by a masked dissident republican gunman.

Month’s Mind Mass to be held in Derry this evening for murdered Lyra McKee was last modified: May 21st, 2019 by John