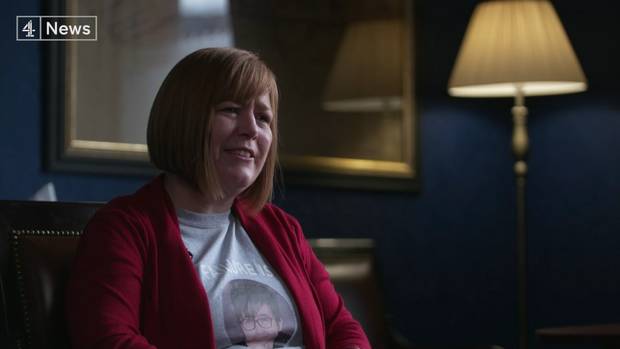 THE sister of murdered journalist Lyra McKee has appealed for her killers to hand themselves in to the PSNI.

Nichola Corner said it was a “terrible irony” that her sister’s killers have robbed themselves of the one person who would have tried to help them.

“She deserves justice and those people need to really think about handing themselves in. They need to do the right thing,” Ms Corner said.

“None of this will ever bring my sister back to my mum, to me, to my brothers, my sisters, or nieces and nephews.

“And as far as I’m concerned, that is the least that these people can do. And anyone whose helping them or guarding them or protecting them, they need to do the right thing as well.

Dissident republican group the New IRA said its members carried out the killing.

A 15-year-old boy and three men aged 18, 38 and 51 were arrested in Derry yesterday in connection with rioting on the night of Ms McKee’s death.

“There is a terrible irony in our Lyra’s murder because she would have understood these people or tried to, and she would have tried to help them,” she said.

“I suppose they robbed themselves of one person who would have wanted to hear their story and would want to help them move forward.”

Ms Corner told Channel 4 News that she still expects her sister to get in touch.

“We were robbed on the night of the 18th of April…I still keep expecting her to pop in at any moment,” she said.

“Just here for five minutes and an hour passes.

“The other night I was on the mobile phone to my daughter and the house phone rang and I said: ‘I better go, that will be Aunty Lyra’, because I just still expect her to ring me.

“For me and for my mum and other members of our family, for us this isn’t real. It doesn’t seem real. We can’t believe that anybody would ever do anything to harm her.”

Ms Corner delivered a eulogy at her sister’s funeral on April 24, which was attended by political leaders.

“When I could feel myself faltering, I could just hear her say, ‘come on Nic you can do it. Do it for me. Do it for me’,” she recounted.

“And when I looked down at her wee coffin, I just took a deep breath, focused myself again on the script, and just promised her that I will do my best.” Ms Corner believes her younger sister’s death must not be in vain.

“The past needs to be put to bed because living in the past there’s not going to be a future and we have to have a brighter future for all those wonderful young people in our society who are coming up,” she said.

“Failure isn’t an option. We have to make Lyra’s legacy not just about the political landscape but about changing society.