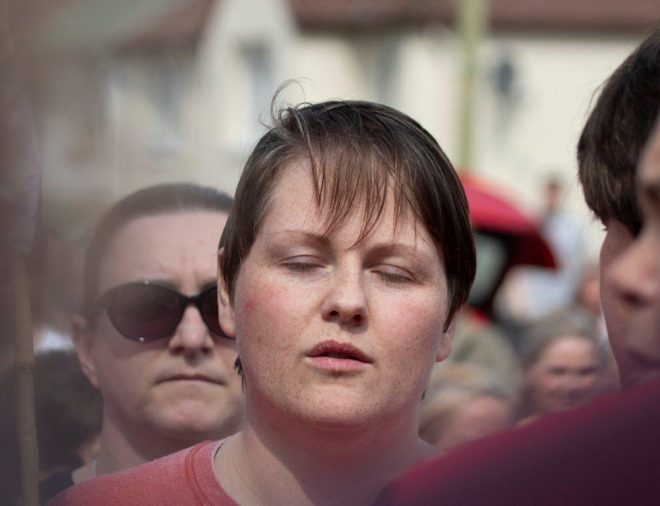 Lyra McKee’s partner Sara Canning paid an emotional tribute to the journalist at a vigil in Derry the day after she was shot dead . Pic By Joe Boland North West newspix

THE devastated partner of murdered journalist Lyra McKee has revealed she challenged the British Prime Minister to legislate for same-sex marriage in the North of Ireland.

Sara Canning said she told Theresa May at Ms McKee’s funeral in Belfast to move to change the laws through Westminster if local politicians failed to act on the issue.

Ms Canning, from Derry, detailed the exchange as plans for a major rally in support of a law change were announced for this weekend.

She will address the event outside Belfast City Hall on Saturday, May 18.

It is being organised by the Love Equality campaign – an umbrella group made up of organisations that support a law change.

Ms McKee was shot dead by the dissident republican She will address the event outside Belfast City Hall on Saturday May 18. It is being organised by the Love Equality campaign – an umbrella group made up of organisations that support a law change.

Ms McKee was shot dead by the dissident republican terror gang the New IRA in Creggan on Thursday, April 18.

Efforts to find resolution to a range of disputes preventing the restoration of devolution, including same-sex marriage, have been injected with fresh urgency following her death.

A new five-stranded talks process started at Stormont House in Belfast on Tuesday convened by the British and Irish governments in a bid to break the two year and four month deadlock.

“Marriage equality is a cause to which Lyra and I were very committed,” said Ms Canning.

“Lyra and I were supposed to be on a big trip to New York this week. We were going to get engaged.

“We talked about getting married in Donegal, but really we wanted our love and our marriage to be recognised in Northern Ireland, just the same as the rest of our family members and friends.

“But to date, politicians have stopped that happening here, despite the fact that most people support equal marriage.

“If the politicians won’t legislate for equal marriage at Stormont, then the Prime Minister should do it at Westminster.

“That’s what I told Theresa May at Lyra’s funeral.

“I wanted her to know that Lyra and I had a right to be treated as equal citizens in our own country. Surely that’s not too much to ask?

“Myself and lots of Lyra’s friends and family are going to be marching for marriage equality. We hope people will join us.”

The ban on same-sex marriage is one of the disputes at the heart of the powersharing impasse in Belfast, with the DUP resisting Sinn Fein calls for a law change.

Partner of murdered Lyra McKee challenges Theresa May on same-sex marriage law was last modified: May 9th, 2019 by John