THE Irish language should not be a source of political division, the wife of former SDLP leader John Hume has said.

Pat Hume said a language should not be “the source of not talking”.

A new talks process aimed at restoring devolution is expected to begin on Tuesday afternoon, May 7.

The talks have been convened by the Irish and British governments.

Previous efforts to restore the assembly have failed without agreement on a number of issues, including Irish language rights.

The North of Ireland has been without devolved government since January 2017, when Sinn Féin’s Martin McGuinness collapsed the coalition government in protest at the DUP’s handling of the cash-for-ash green energy scandal.

As well as the Irish language, the parties have failed to find a compromise on other issues, including the legalisation of same-sex marriage.

“The time for self-righteousness and hypocrisy has to end,” Mrs Hume said.

“Politics is about compromise, about the art of the possible. They have to be more creative, they have to see the big picture.”

She added: “Please don’t let a language, used for communication, be the source of not talking.”

“John Hume was a great man for dialogue and he would be heartbroken if he could follow what was going on at the moment,” she told BBC Radio Foyle. 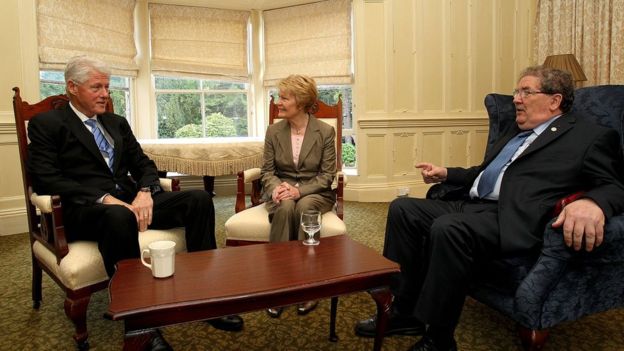 “I remember in 1993 when the news broke of his talks with Gerry Adams, and he was vilified from one end of Ireland to the other.

“But he had the vision and the courage to continue with those talks despite all the vilification.”

She said that while the impasse continued, “trolleys were piling up in hospital corridors, numbers rising on waiting lists, schools crying out for funding”.

“It is not going to be easy for our politicians to make the necessary compromises, but I have hopes that it will happen,” she said.

She also said there are those ready to take advantage of the stalemate.

“I think where there is a vacuum, it is going to be filled,” she said.

“Unfortunately in our case, it is filled with the so called dissidents of the IRA, who are only too willing to have an excuse to get back on to our streets.”

‘Irish language should not divide politicians’, says Pat Hume was last modified: May 8th, 2019 by John