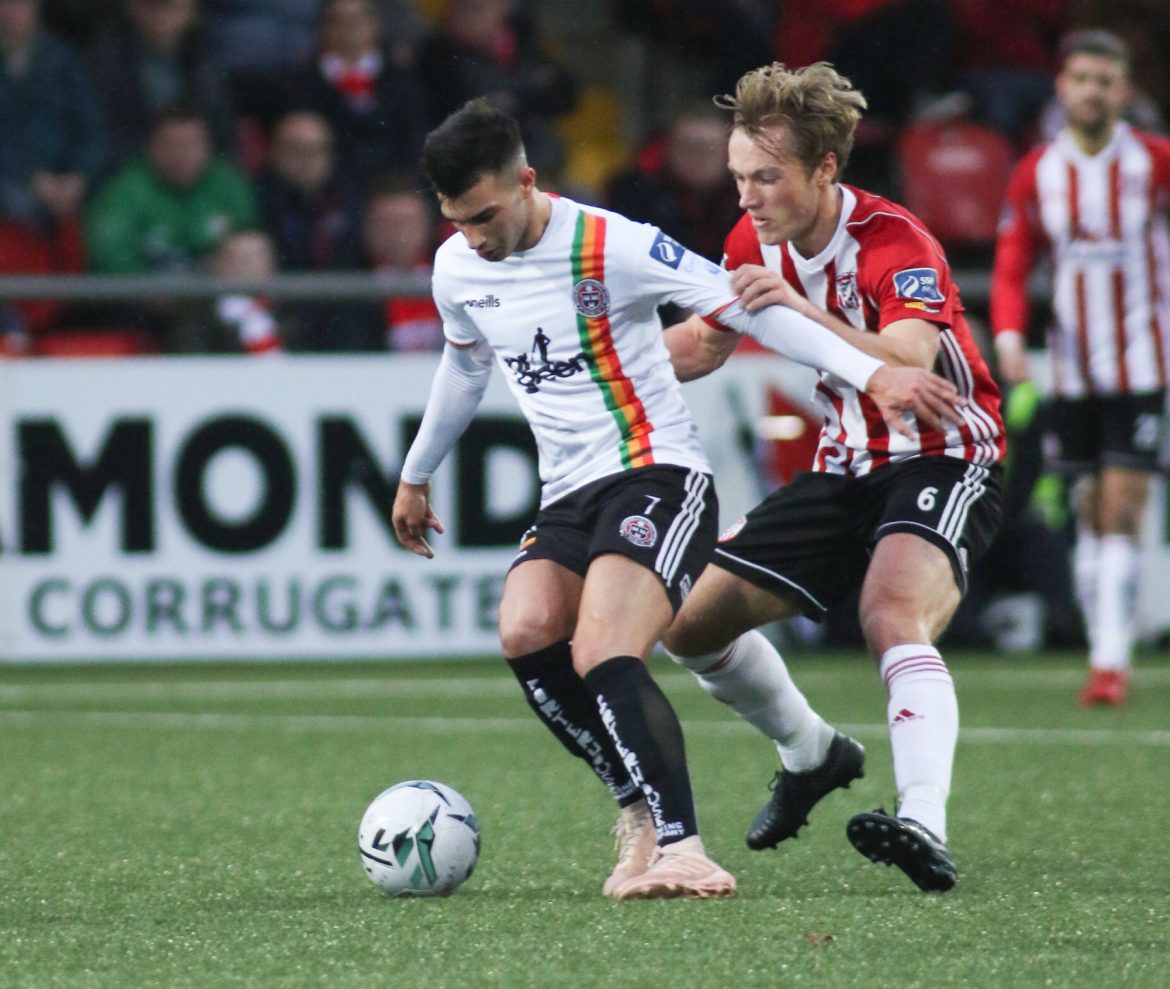 Bohemians ensured they remained hot on the heels of Shamrock Rovers and Dundalk as they move six points clear of Derry City in third with a 2-0 victory at the Ryan McBride Brandywell Stadium on Monday.

Goals from Danny Mandroiu after 53-minutes and Dinny Corcoran 11 minutes from time sealed an impressive three points for the Gypsies on the Lone Moor Road.

The defeat for Derry City means they have now tasted defeat against all three sides at the top of the table – Rovers, Dundalk and Keith Long’s Bohs all picking up maximum points in the north-west – and six points behind the final European place.

Both sides came out of the traps quickly, Derry City registering the first shot on target after three minutes.

The opening move started as Eoghan Stokes pinched possession before striking from 20-yards, sending James Talbot scrambling across his goal line, but the ball flashed just past the post for a goal kick.

Bohs responded in a similar fashion, Kevin Devaney being denied by Peter Cheerie inside the 18-yard box before Stokes was at it again at the other end, this time the former Bohs midfielder driving one past the other post.

City went close again midway through the first half, Ciaron Harkin finding Greg Sloggett in an abundance of space at the back post from a free-kick but the former UCD man failed to head home from close range.

The second period of the first half petered out to a degree, both sides struggling to create chances going forward, losing possession too easily in the final third.

However, another opportunity eventually fell at the feet of Ciaron Harkin after 39 minutes, McNamee and Junior Ogedi-Ozkwe playing some excellent integrate, before the Creggan’s man spurned his effort over the crossbar.

Shortly after the restart, the Candystipes were hit by a sucker punch as Dinny Corcoran’s deft pass saw Danny Mandroiu through on goal and the Irish U21 midfielder didn’t need to be asked twice as his thunderbolt wen through Cherrie to give Bohs the lead.

Derry City responded well but it didn’t stop a resurgent Bohemians from flooding forward, the Dublin outfit almost doubling their lead two minutes later as Danny Grant’s effort crashed off the outside of the near post.

And Dinny Corcoran, the assister, almost snatched his seventh goal of the season from 10-yards, Jamie McDonagh’s last-ditch defending saving the home side from conceding twice in quick succession.

Derry City simply didn’t show up in the second half and it gave Bohs the extra cutting edge.

And it was the far from magnificent from Long’s side as Derry City’s defence unit gifted the north Dublin side their second.

A calamity of mistakes from Greg Sloggett, whose weak pass put goalkeeper Cherrie in all sorts of trouble, the Scot missing the ball completely to give Corcoran a simple tap-in from 15-yards.

Bohs never looked back, although they barely had a moment’s trouble defensively all night.