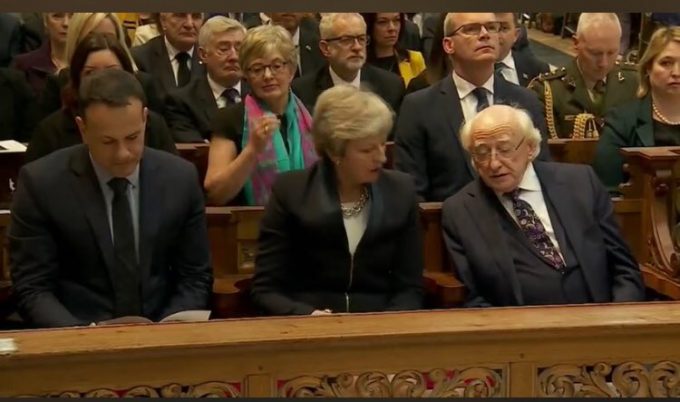 TAOISEACH Leo Varadkar and British Prime Minister Theresa May have issued a joint statement setting up a new talks process aimed at restoring devolution to the North of Ireland.

The Stormont Executive collapsed in January 2018 when deputy first minister Martin McGuinness walked in a row with DUP over the RHI ‘cash-for-ash’ scandal.

There were calls this week for politicians to put aside their differences and sort out the deadlock following the murder in Derry last week of journalist Lyra McKee.

Leo Varadkar and Theresa May attended her funeral along with Ireland’s president Michael D Higgins and the leader of the main political parties in the North.

Priest Fr Martin Magill received a standing ovation at her funeral in St Anne’s Cathedral when he said:

“”Why in God’s name does it take the death of a 29-year-old woman with her whole life in front of her to get to this point?”

Today’s joint statement from the Irish and British Prime Ministers said: “”In coming together with other political leaders in St Anne’s Cathedral to pay tribute to Lyra McKee, we gave expression to the clear will and determination of all of the people of these islands to reject violence and to support peace and a better future for everyone in Northern Ireland.

“”We have agreed to establish a new process of political talks, involving all the main political parties in Northern Ireland, together with the UK and Irish governments, in accordance with the three stranded process.

“The aim of these talks is quickly to re-establish to full operation the democratic institutions of the Belfast/Good Friday Agreement – the NI executive, assembly and North-South Ministerial Council – so that they can effectively serve all of the people for the future.”

The statement added: “We have asked the secretary of state for Northern Ireland and the tánaiste [Irish deputy prime minister] to meet later today in Belfast to set out our proposed approach and to commence the talks process as soon as possible after the local elections in Northern Ireland.”

The talks are expected to begin as soon as possible after next week’s local elections in Northern Ireland.

The two governments are to review progress at the end of May.

Both premiers have also agreed that that there should be a meeting of the British-Irish Intergovernmental Conference during the same period.

“The conference will consider East/West relations, security cooperation, and political stability in Northern Ireland,” they said.