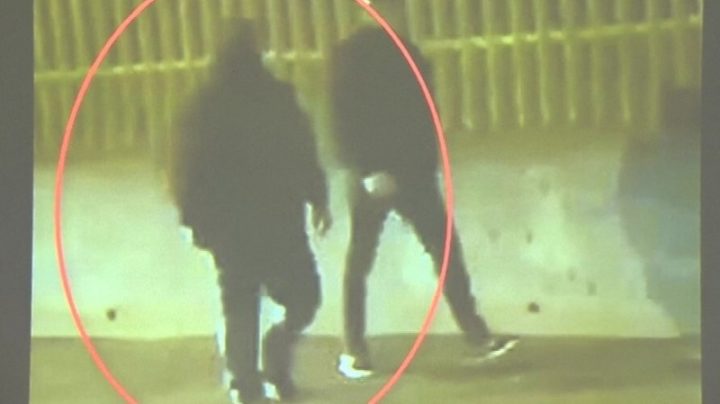 The PSNI say ‘people saw this young man and his associates’

THE senior detective leading the investigation into the murder of Lyra McKee following violent disorder in Creggan in Derry last Thursday, April 18 has issued new footage and made a fresh appeal for information.

The 29-year-old journalist was shot dead by a lone, masked dissident republican gunman as she observed rioting in Creggan.

A service of thanksgiving and celebration of Lyra’s life was held at a packed St Anne’s Cathedral in Belfast on Wednesday.

Independent charity Crimestoppers has offered a reward of up to £10,000 for information which leads to the arrest and conviction of Lyra’s killers.

Today police have released CCTV footage of the gunman and his accomplices:

Detective Superintendent Jason Murphy said: “I want to find the people who murdered Lyra and I believe the information that can help us bring those responsible to justice lies within the local community.

“Approximately 100 people were on the ground on the night Lyra was murdered – people saw the gunman and his associates.

“I think people within the community know who they are. I’m asking them to come forward and help us.

“I’m releasing footage today from the night of Lyra’s murder and I want to appeal to anyone who recognises or knows these people to talk to us.

“About one minute before Lyra was murdered, three men walked across Central Drive from the direction of the shops. In the footage you can see these men. At the front you can see a man circled – he’s carrying a crate of petrol bombs towards where the crowd including children, were standing. He is the tallest of the three men – I want to know who he is.

“Behind him you can see two other men. The man on the inside nearest the wall is the next tallest. He’s wearing dark skinny jeans, blue Nike trainers with a white tick and a white sole. He’s wearing a camouflage scarf or other covering across his face. Do you know this man?

“In other footage he can be seen holding a petrol bomb and in the new light his clothing is clearly visible.

“As he walked along the footpath, he was accompanied by the third man. In the footage you can see that he is shorter than both of the other men and of stocky build. It’s my belief he is the gunman that fired indiscriminately into the crowd, placed the community and police officers at risk and took the life of Lyra. You can see he is wearing dark clothing and in other footage you can see this clothing in a different light. People know who he is.

“I recognise people living in Creggan may feel it’s difficult to come forward to speak to police.

“I want to provide a personal reassurance that we are able to deal with these concerns sensitively.

“At Lyra’s funeral on Wednesday we heard many messages about the potential for a better future but as I have said previously, such sentiment will all be in vain if collectively we cannot tackle the malign influence that some individuals continue to exert over our communities.

“I am really grateful to the Crimestoppers charity for supporting our efforts to unlock the information that I believe rests within the community. The substantial reward is a recognition of the challenges that the community may feel exist.

“To date, we have received widespread public support including more than 140 people providing images, footage and other details via our dedicated Major Incident Public Portal.

“However, community information and intelligence is not evidence. Lyra McKee and partner Sara Canning. Lyra had plans to propose to Sara and marry her

“Such information simply gets me through the door but it doesn’t get me to a courtroom.

“I need people to contact my team, to talk to us about what they know. I would urge anyone who has any information, or who witnessed the murder, to contact the police on 101.

“Or if someone would prefer to provide information without giving their details, they can contact the independent charity Crimestoppers and speak to them anonymously on 0800 555 111.’