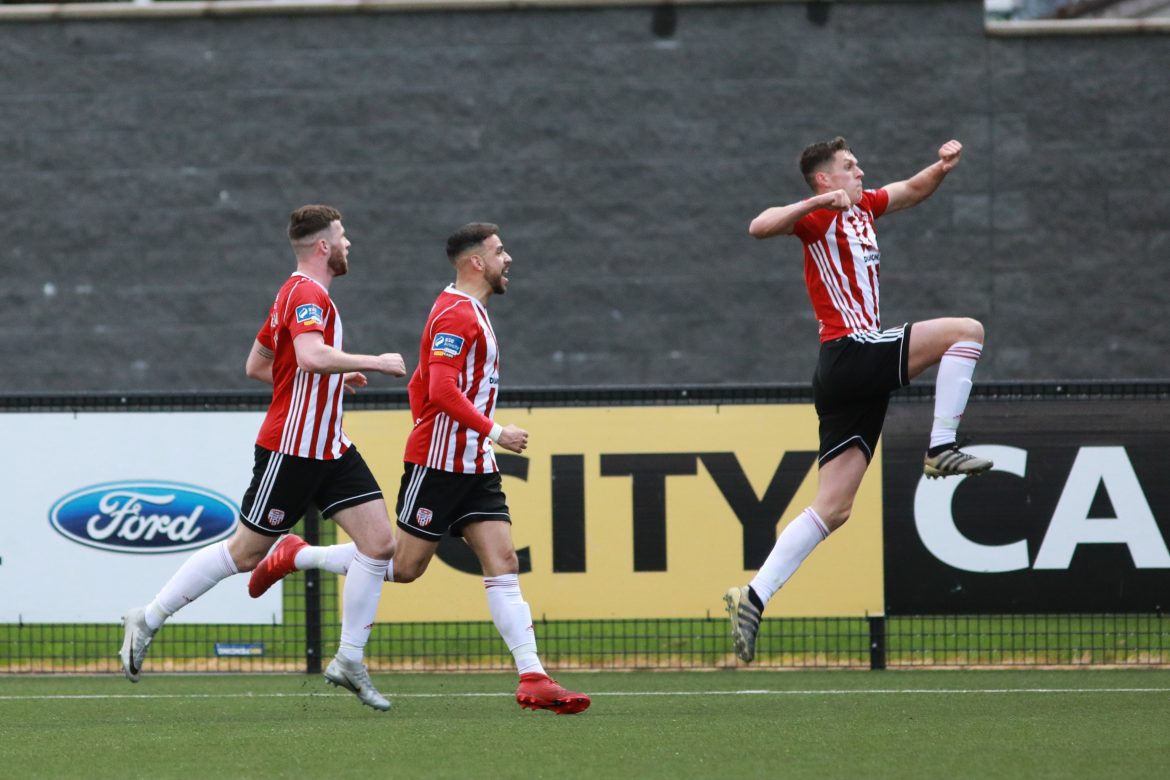 Derry City moved to within three points of third place Bohemians with an impressive 2-0 victory at the Ryan McBride Brandywell Stadium against ten-man Cork City.

Goals from Eoin Toal and Jamie McDonagh was enough to seal the three points against a lacklustre Cork side, who dropped to eighth, two points above UCD in the relegation play-off spot.

It was 101st league meeting between the two sides with Derry City claiming their 28th win on the Lone Moor Road on Friday night.

The Candystripes started quickly and they made their intentions know when they scampered on the counter-attack after seven minutes, Eoin Toal pinching possession from Daire O’Connor after a quick-fire free-kick.

Jamie McDonagh’s sublime cross into the six-yard box looked to be on a plate for David Parkhouse but Dan Casey was active to the imminent threat.

However, the Cork defender failed to clear the danger before Junior Ogedi-Uzokwe attempted an audacious overhead kick that came to nothing.

John Caulfield’s side looked compact at the back, Conor McCormack doing a lot of the dirty work against his former side but their resolve was broken after 22 minutes.

Jamie McDonagh’s inswinging free-kick, 10-yards from the edge of the ‘D’, was met by the incoming Eoin Toal as the defender pounced to give Derry the edge. 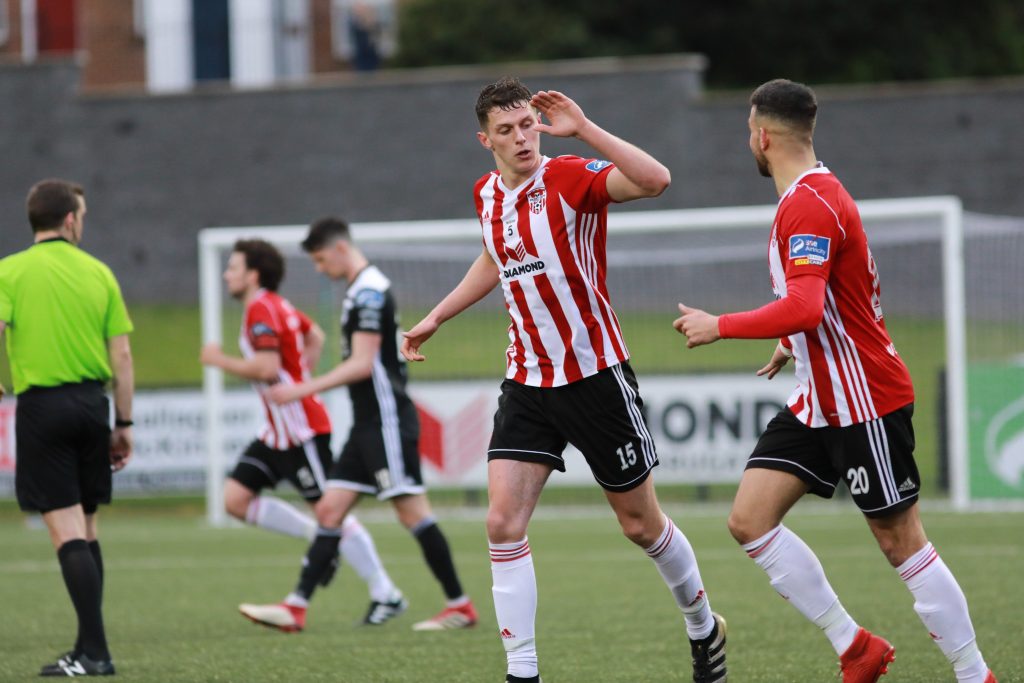 The visitors, who were suffering from an error-strewn first half, struggled to produce anything of real quality in the final third as Derry piled on the pressure.

Several more chances presented themselves before the break for Barry McNamee, Parkhouse and Ciaron Harkin but they failed to divert beyond Mark McNulty.

After the restart, Cork City came out of the traps quickly and close to the hour mark Karl Sheppard’s effort from 20-yards caused major problems for Peter Cheerie, the former Cork goal minder putting it behind for a fruitless corner kick.

Meanwhile, after 62 minutes Jamie McDonagh’s free-kick gathered pace beyond the Cork wall but McNulty easily gathered inside the penalty area.

The Foylesiders were causing the Turners Cross outfit formidable problems from set-pieces and Eoin Toal, in particular, was proving a considerable force and he should have secured his second after 67 minutes.

However, drama ensued at the other end with 20 minutes on the clock.

Daniel Smith and Sheppard produced splendid integrate play to earn a corner-kick before chaos ascended into the penalty area.

But the referee didn’t hesitate when Conor McCormack upended McNamee inside the penalty area at the other end with Derry awarded the spot kick on 78 minutes.

And the bad news didn’t stop there for Cork, as McCormack picked up two yellows card in two minutes to see Caulfield’s outfit reduced to 10 men in the closing stages.

But after all the drama, McNulty proved the hero as he denied McDonagh from the spot – a huge chance squandered by Derry. 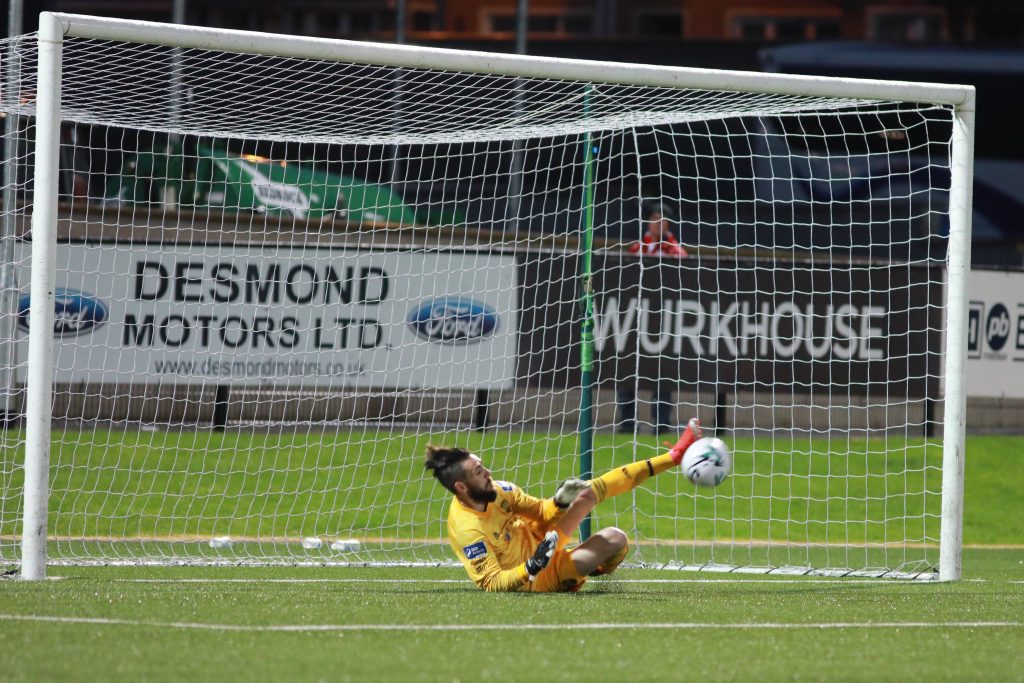 With the home side firmly in control and turning on the style, McDonagh’s eventually repaid the Derry faithful with a thunderbolt from 20-yards to finish the contest.

Superb combination play between Ogedi-Uzokwe and Harkin, outside the 18-yard box, laid it perfectly for McDonagh, who sealed redemption with a stunning strike from distance to send beyond McNulty into the bottom corner.