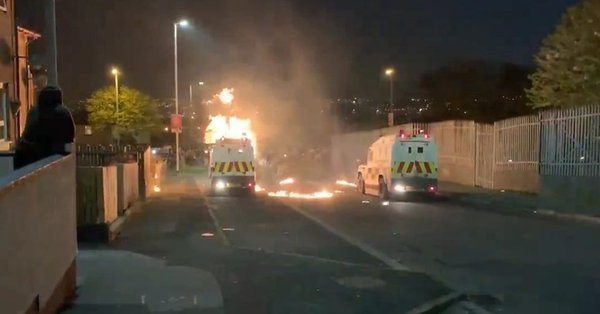 A 29-year-old woman has been killed after shots were fired in Derry, with police treating it as a “terrorist incident”.

Assistant chief constable Mark Hamilton, from the Police Service of Northern Ireland, said a murder inquiry had been launched after the death in the Creggan area of the city amid unrest on Thursday evening.

Trouble flared in Creggan when police came under attack from crowds.

Police said a number of shots were fired.

Police said a number of shots were fired.Petrol bombs were also thrown at police Land Rovers.

There are reports that the trouble broke out after police raids on houses in the Mulroy Park and Galliagh areas.

PSNI superintendent Alan Hutton said: “We are currently responding to reports that a member of the public has been injured and I would appeal for calm.”

The unrest comes ahead of the Easter weekend where Republicans mark the anniversary of the 1916 Easter Rising and a time when dissidents are traditionally active.

The Sinn Fein deputy leader, Michelle O’Neill, said the killing in Derry was a “senseless loss of life”. She said: “I am shocked and saddened at the tragic news that a young woman has been shot dead by so-called dissidents in the Creggan estate tonight.“

“The murder of this young woman is a human tragedy for her family, but it is also an attack on all the people of this community, an attack on our peace process and an attack on the Good Friday Agreement.

“I unreservedly condemn those responsible for killing this young woman.

“We will remain resolute in our opposition to the pointless actions of these people who care nothing for the people of Derry. We remain united in our determination to building a better and peaceful future for all.”

O’Neill added: “Those responsible should listen to the people, they should disband immediately and end their pointless actions against the community which tonight has tragically claimed the life of a young woman.“I am appealing for calm and I urge anyone with any information about this killing to bring it forward immediately to the police and assist their inquiries.”