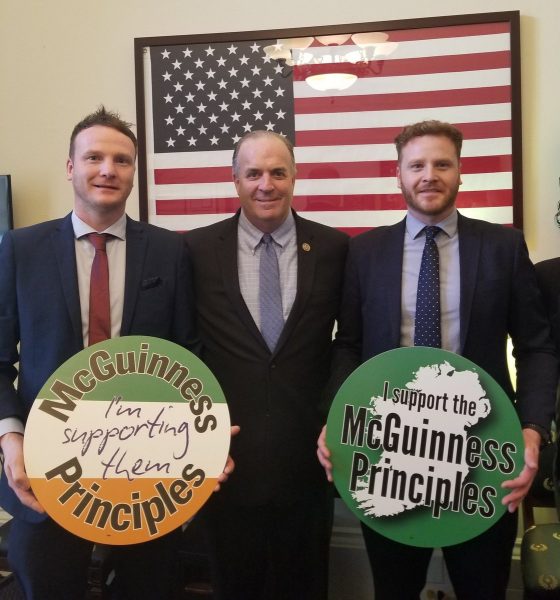 US delegation to meet with McGuinness family

Emmet and Fiachra McGuinness in USA earlier this month

THE General Presidents of two of the biggest trade unions in the US, who were among the first to endorse the McGuinness Principles campaign, will meet the family of Martin McGuinness today in Derry.

Speaking ahead of visiting Derry today, Wednesday, April 17, they commented: “The McGuinness Principles is an initiative launched by Irish American organisations, activists and union leaders aimed at helping secure the full implementation of the Good Friday Agreement.

“Martin’s sons Fiachra and Emmet travelled to DC and New York in April last year for the launch of the campaign.

“The campaign was named in recognition of Martin McGuinness’ s commitment to freedom, justice and the reunification of Ireland.

“Martin McGuinness was proud to work with Irish America and we are proud to continue his work to realise the shared vision of a united Ireland that cherishes all the Irish people equally.”

The campaign has four main aims, a Bill of Rights, full statutory equality for the Irish language, legacy inquest funding and a referendum on Irish Unity.

US delegation to meet with McGuinness family was last modified: April 17th, 2019 by John