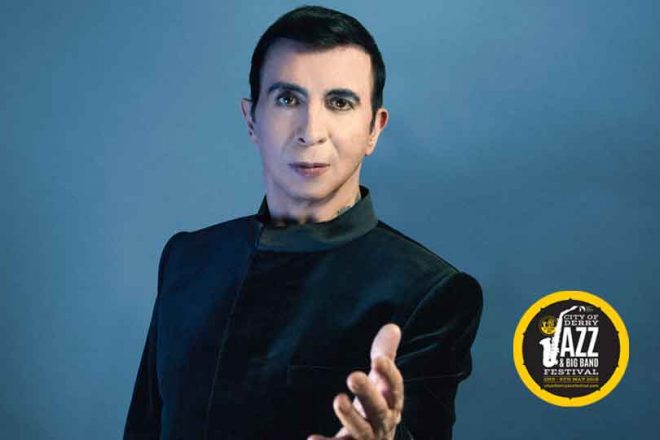 MARC Almond is a name synonymous with the 80’s, as the unforgettable frontman of synth-pop duo Soft Cell whose distinctive brand of electronica is an irresistible summons to the dance floor to this day.

Since the golden era of 80’s pop Almond has been on a prolific creative journey that’s taken him across the globe exploring every musical avenue from Russian folk music to jazz.

In his solo career alone he has notched up an impressive 20 studio albums and more than 30 million records sold. His unforgettable 1981 No.1 hit single ‘Tainted Love’ broke all records as the track that remained in the US Billboard Top 100 for the longest ever recorded period, securing him a place in pop history.

Next stop on Almond’s musical odyssey is the City of Derry Jazz and Big Band Festival where he will be bringing his Greatest Hits show to the Millennium Forum.

The show features a magical medley of Number One and Top Ten hits guaranteed to have music lovers on their feet including the inimitable ‘Tainted Love’ and ‘Something’s Gotten Hold of My Heart’ as well as ‘Say Hello Wave Goodbye’ and ‘The Days of Pearly Spencer’, songs from his recent critically acclaimed album ‘Shadows and Reflections’.

Their enduring popularity means that songs like ‘Tainted Love’ are regular classics in pubs and clubs and belted out at karaoke sessions throughout the world – and after four decades Marc Almond still enjoys revisiting the hits that made him a household name.

Speaking ahead of the gig, which takes place on May 2nd, he said he was looking forward to returning to Ireland where he will be starring solo at the Jazz Festival, and also taking part in the Forever Young concert in Naas in July as part of a ‘who’s who’ line up of 80’s pop favourites including The Human League and Kim Wilde.

“It’s always a joy to sing the songs that started my career,” he reveals. “I’m very grateful to those songs and the fans that have been with me from the start.

“But I do I like to look forward rather than back and I’m always thinking about my next performance or album. I have been writing a new studio album with producer Chris Braide which will be released through BMG in Feb 2020 which I’m really excited about.

“80’s synth pop never really went away. Although it is having a bit of a moment.

“There are the familiar faces that come to most of my shows and always have done and so many families with their children out for a good time – how great is that!? I love seeing a diverse mix of people in my audiences.”

And thankfully he has no plans to hang up the mic just yet. “I’ll continue to do what I love for as long as I can. It’s hard to ever envisage a time where I stop completely,” he admits.

Over the past year Almond has resumed his long-standing creative partnership with music legend Jools Holland, which began over a decade ago, to produce a fantastic new album titled ‘A Lovely Life to Live’.

The album features a mix of covers, including a big band version of Soft Cell’s ‘Tainted Love’ and a number of original songs written by the duo, all backed by Holland’s Rhythm and Blues Orchestra.

Throughout his work Almond has collaborated with a whole host of artists, creative alliances that have produced some of the most memorable moments of his career.

“I’ve done so many collaborations because I love working with other creative people. My most memorable one was meeting with Gene Pitney who was a real gentleman and star. We met for the first time in Las Vegas which was extraordinary,” he recalls.

Having played in Ireland over the years Almond is looking forward to his return in May and promises fans a fun-packed night of retro classics in return for a warm Derry welcome.

“The audience in Ireland are always amazingly warm and generous. Ireland is such a beautiful country and I love visiting when I can.

“Anyone who comes along to the show at the Millennium Forum can expect a night of hits and surprises. It will definitely be great fun!”

This year’s City of Derry Jazz Festival runs from Thursday May 2nd to Monday May 6th, with a whole host of talent on display featuring over 200 artists across 70 venues.

The Festival is supported by the Youth 19 programme – delivered with support from the Peace IV programme, the Big Lottery Fund, and the North West Regional Development Fund – Diageo, and Tourism NI.

You can download the full programme now at www.cityofderryjazzfestival.com