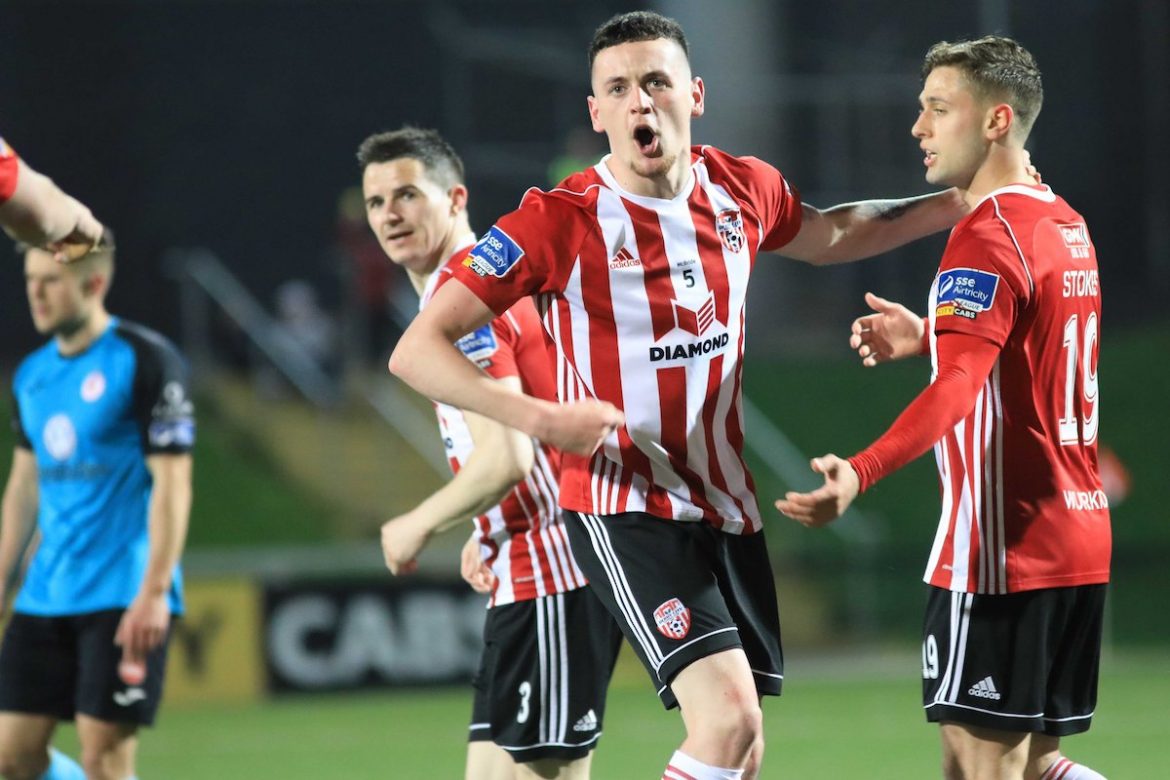 Two second-half goals from Derry City secured a valiant victory against Sligo Rovers following a tight encounter at the Ryan McBride Brandywell Stadium to move the Candystripes into fourth place.

Report from Shaun Keenan at the Ryan McBride Brandywell Stadium.

Goals from David Parkhouse and Ciaron Harkin was enough to separate the two sides in a game where Sligo Rovers will feel they could have had something on a different night.

The lack of conviction in front of goal proved the difference for Rovers, profligacy ultimately proving costly.

Sligo Rovers initially started the better of the two sides, creating the opening chances as Ronan Coughlan had an opportunity from five-yards, only for the City defence to clear the danger.

After 10 minutes, Declan Devine’s reshaped, youthful Derry side got themselves into gear and they should’ve secured the opening goal.

The lively Eoghan Stokes found space in the penalty area and Barry McNamee returned the compliment but, as the Brandywell arose in jubilation, the air was engulfed as the ball hit the side-netting for a goal kick.

A minute later and Sligo Rovers nearly snatched the lead for themselves, the incoming Nathan Gartside repaying Devine’s confidence, pulling off a superb one-handed save to deny Liam Kerrigan from 25-yards.

The Bit o’Red came to the Brandywell having dispatched of Derry twice on Foyleside last season.

However, times have changed drastically for Sligo since then with Liam Buckley’s revamped Rovers side managing to frustrate City in a dour first half.

Shortly after the break, McNamee pounced from distance, his shot sailing well wide of the target before Junior Ogedi-Uzokwe’s snapshot header inside six-yards was collected by Michael Beeney.

Close to the hour mark and Sligo’s good work was almost in vain as Dante Leverock conceded possession to McNamee.

The Derry City captained pinched possession from the Rovers centre-half before his half-hearted effort deflected off Beeney as Stoke came in for the rebound but his close effort could only hit the near post.

It took until the 59th minute for Derry City to break the deadlock, the ever-reliant McNamee finding David Parkhouse on the right with a deft pass before the lone striker slotted home.

Other chances presented themselves for Derry in the final period but they failed to take them and they almost paid the price.

John Russell, who had been only introduced minutes prior, put a slick low cross into the path of the incoming Coughlan but he was unfortunate to see his low drive glance just wide.

In the final five, Derry City struggled to escape their own half and Russel’s advancing strike on the edge of the ‘D’ went narrowly out for a goal kick.

An extra layer of gloss was added when Ciaron Harkin secured City’s second after 93 minutes to seal the three points and move City’s three-points behind Bohemians in third.