SOLICITORS acting for relatives of the 14 victims murdered on Bloody Sunday have called for Soldier F to face Derry Magistrates’ Court.

Last week, the Public Prosecution Service announced that Soldier F is to be charged with two counts of murder and four counts of attempted murder.

The murder charges relate to the cold blooded killings of James Wray and William McKinney on January 30, 1972.

The sole prosecution is seen as a “terrible disappointment” by some of the families of the 13 people killed on that day.

They were shot dead at a civil rights march on 30 January 1972. A 14th victim later died of his injuries.

Their lawyers now plan to challenge that decision by way of a judicial review in the High Court.

There has been speculation that Soldier F will be served with an indictable summons to appear at a Belfast Court in the coming weeks.

But lawyers acting for the relatives say he should face Derry’s courthouse in Bishop Street given that the offences were committed just a few hundreds away 47 years ago.

In a letter to the PPS this week, legal firm Madden & Finucane has asked the PPS for clarity on the next stages of the prosecution process.

Solicitor Ciaran Shiels wrote: “Please also confirm the date upon which the defendant shall first appear in court
charged with two counts of murder and four counts of attempted murder.

“We assume that this first appearance shall be at Derry Magistrates Court given that the offences with which the defendant is charged happened within 250 yards of Derry Courthouse.

“If we are incorrect to assume so, please set out the full and precise reasons for your decision requiring the defendant to appear at an alternative court.

“We further assume that the defendant shall be charged and prosecuted for these most serious of offences without the benefit of anonymity, to ensure that this prosecution is conducted in a fair, open, transparent – and most importantly – public manner.

“As the PPS must surely be aware, a mere four soldiers have been successfully prosecuted for the offence of murder during the recent conflict, in circumstances where the British Army were responsible for the deaths of over 300 civilians, inclusive of more than 60 children.

“Those four soldiers were prosecuted without the benefit of anonymity, and at a time when the seriousness of the security situation in this jurisdiction was unparalleled. 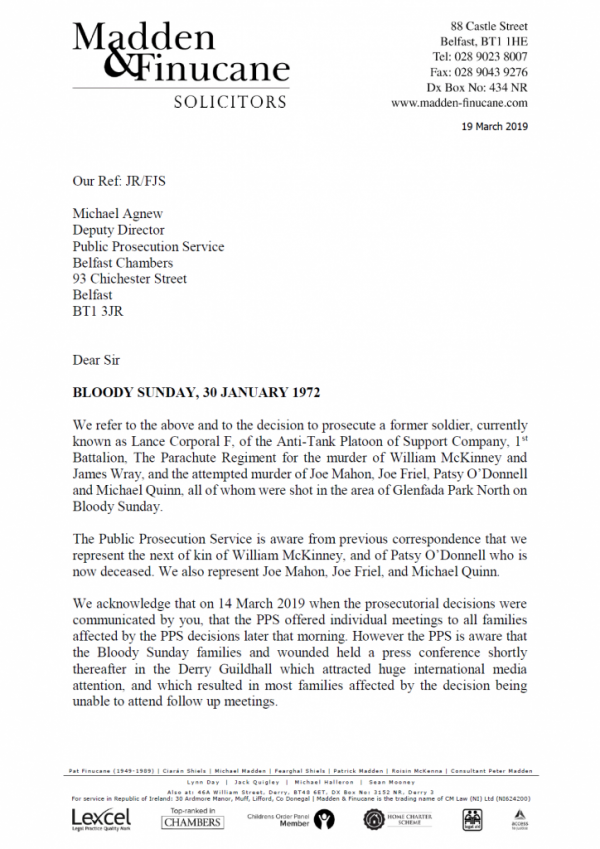 “We cannot conceive of any legitimate basis upon which this defendant could expect to be tried in circumstances inconsistent with any other defendant charged with murder and attempted murder and we trust that the PPS decision in this regard shall not be affected by political interference in the independence of the role of the PPS.

“We anticipate that the PPS is very much aware that the decisions communicated by it on 14 March to the families and wounded that we represent have caused profound disappointment and shock, not just to those directly affected, but also to much of the wider community in Derry and beyond.

“We need not remind you of the basic facts in this case: 108 high velocity rounds were fired by identified
individuals within 1 Para; 14 innocent civilians were murdered; a similar number were injured; yet only 1 defendant is to be prosecuted.

“Accordingly, we consider that this correspondence raises fundamental issues of the utmost public importance, and in circumstances where we consider that the credibility of, and public confidence in, the Public Prosecution Service is firmly in issue, therefore we require an urgent response to the issues raised herein.

“Finally, we are continuing to give close scrutiny to the decisions reached in cases not to prosecute other soldiers (including this defendant for at least three other murders and two attempted murders) and shall return to you with grounds for a review of such decisions in the coming days.

“You are no doubt aware from our initial response to the decisions communicated by your office on 14 March that we fully intend to challenge decisions not to prosecute other soldiers for murder and attempted murder by way of judicial review in the High Court,” he added.