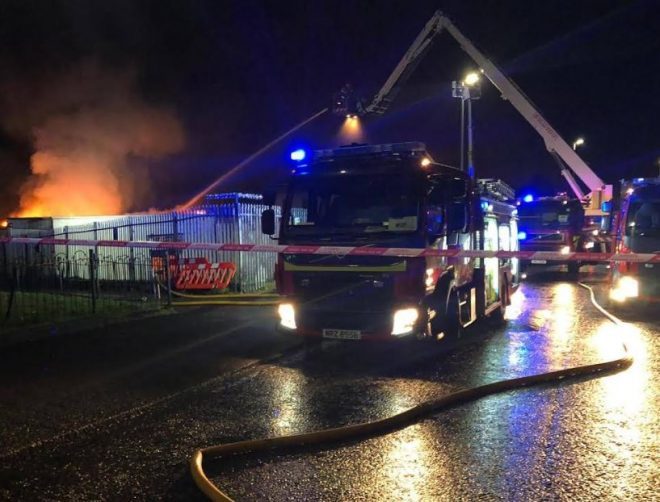 FIRE chiefs in Derry are warning that those starting deliberate fires in the city are potentially putting lives at risk.

And they also warn that while crews are dealing with these mindless acts of arson, lives could also be lost at other real emergencies that they are delayed from attending as quickly as they normally would.

The Fire and Rescue Service was responding to a series of weekend fires – five in total – at the now disused St Mary’s Youth Club in Creggan.

Around 40 firefighters from Northland and Crescent Link stations in Derry, Strabane, Dungiven and Ballymoney were called in to tackle Saturday night’s blaze.

It took crews over five hours to bring the blaze under control.

In a statement, NIFRS say: “We are appealing for people to stay away from former St Mary’s Youth Club/Creggan Community Centre at Fanad Drive in Creggan following a number of deliberate fires in the derelict building.

“Firefighters attended five incidents at the site over the weekend.

“The largest incident was on Saturday night, March 16.

“A total of nine appliances from Northland, Crescent Link, Strabane, Dungiven and Ballymoney fire stations with approximately 40 firefighters attending the incident to extinguish the fire which destroyed 80 per cent of the building.

“Firefighters were at the scene dealing with the incident until 2.15 am on Sunday, March 17.

“Firefighters also attended four other incidents at the site over the weekend, three of which involved rubbish deliberately set on fire.

“NIFRS is appealing to people to stay away from the site and is warning about the dangers of deliberate fire setting.

“Deliberate fires are a risk to both the public and firefigthers.

“And they could have an impact on the local community. “If NIFRS resources are responding to a deliberate fire this may have the potential to cause a delay in response to a real emergency in the area.

“NIFRS has been in contact with the owners of the site to ask that the site is secured.”