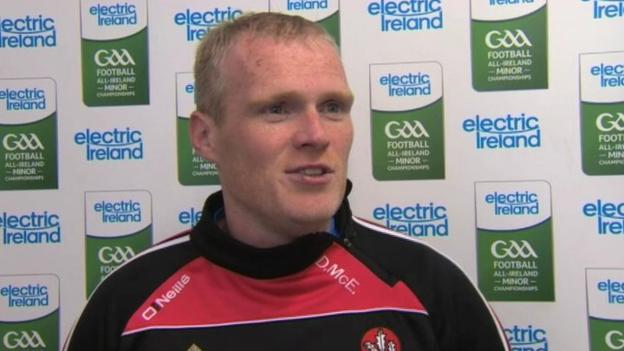 DERRY maintained their 100 per cent record in the Allianz League winning promotion to Division Three with a storming second-half performance secured a 0-13 to 1-05 victory away to Limerick on Saturday.

Damian McErlain’s men have won all five of their league fixtures this year.

The Oak Leafers have two games left but promotion has been secured as only second-placed Leitrim can catch them.

Derry trailed by two at half-time, with Limerick’s Colm McSweeney netting the only goal, but a string of unanswered points put the visitors in command.

Chrissy Bradley landed five points in a row before a Ryan Bell score edged Derry into a 0-8 to 1-4 lead.

Ciaran McFaul, Shane McGuigan and Karl McKaigue were also on the scoresheet as the visitors won at a canter.

As well as gaining promotion Derry, a Division One team as recently as 2015, will be involved in the Division Four final at Croke Park on 30 March.

Their last two matches in the regular league campaign are at home to Leitrim and Wexford.

Meanwhile Antrim, out of the promotion race, were edged out 1-9 to 1-8 in their game away to Waterford.

Lenny Harbinson’s men held a five-point lead midway through the second half, but ultimately came away from the WIT Arena empty-handed.

The Saffrons next play Wicklow at home on 16 March and finish the campaign away to Limerick on 24 March.