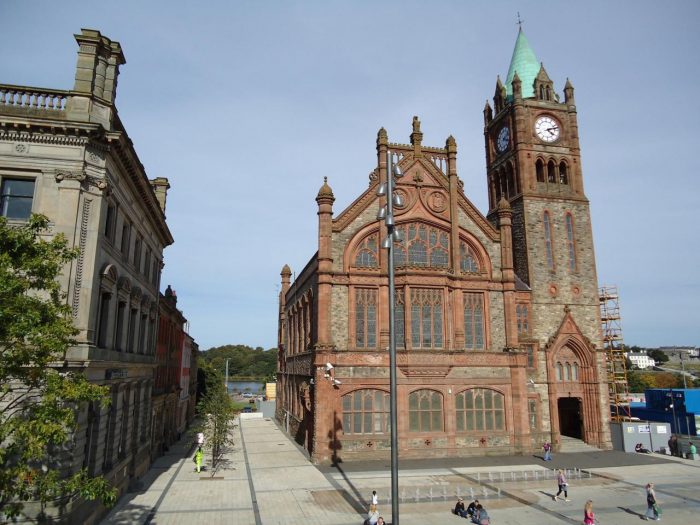 Council row erupts over lighting up Guildhall for Irish Language

A ROW has erupted at Derry City and Strabane District Council about lighting up civic buildings in support ofthe Irish language.

Conradh na Gaeilge made a request to light up Derry’s Guildhall or another civic building for a day in support of the campaign for an Irish Language act – Acht na Gaeilge.

The council passed the plan in a vote but it was not supported by unionists.

Sinn Féin has been calling for a standalone Irish language act for years.

The party’s demand has been the main sticking point in the deadlock between it and the Democratic Unionist Party (DUP) in talks to restore devolution at Stormont.

Sinn Féin has said language legislation “would enshrine the rights of Irish speakers in Northern Ireland”.

But the DUP has refused agree to it and in February 2018 talks aimed at restoring devolution collapsed at the 11th hour because of another fallout about the Irish language.

After a council meeting on Thursday evening, DUP councillor and former Mayor Derry Hilary McClintock said: “The lighting up of civic buildings has been about health or for charities.

“This, though, is purely political and a Sinn Féin agenda.

“This is a complete step outside our normal agenda for council to do something like this.

“This isn’t about finance – it’s not even really about the Irish language act.

Sinn Féin councillor Kevin Campbell said: “It is important that the lighting up of buildings happens because it’s about equality.”

“This is not about politics – this is about culture.

“It’s £200 coming out of the mayor’s budget to light up the Guildhall for one day,” he added.