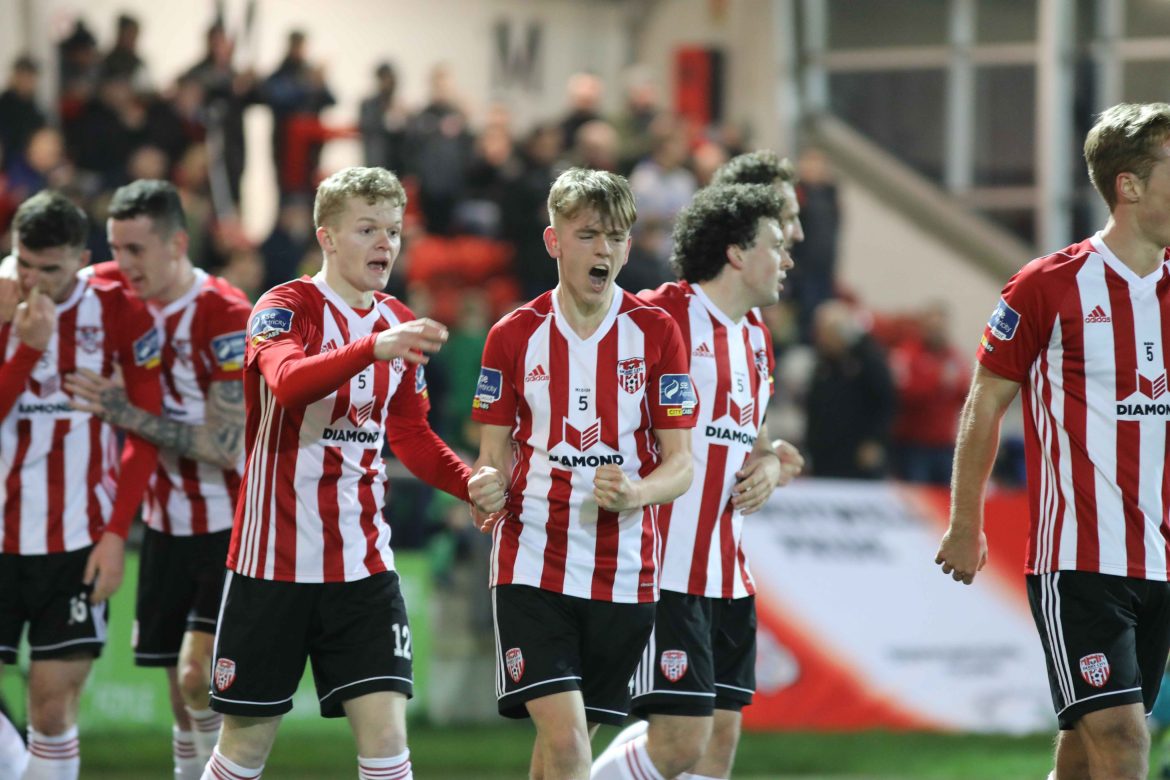 Derry City held on to secure a 3-2 victory against a well-drilled Waterford side at the Ryan McBride Brandywell Stadium.

Report by Shaun Keenan at The Ryan McBride Brandywell Stadium

A first-half goal from Ciaron Harkin was followed by a crazy, chaotic second half laced with drama.

Two own goals from Damien Delaney and Georgyo Poynton all but sealed the points for City before Cory Galvin scored a stunning consolation goal from 35-yards to give his side an outside chance.

The blistering game started laboured on Foyleside as both teams huffed and puffed, trying to enforce their style of play on the contest.

With Ireland U21 manager Stephen Kenny looking over two former henchmen of his from the stands, Declan Devine and Alan Reynolds rallied loud from the sidelines, urging their sides on.

It was clear that Waterford posed the threat on the counter-attack but City’s Junior Ogedi-Uzokwe was proving a handful for Kevin Lynch on the right side.

So much so, that the Lone Moor Road side nearly took the lead after 10 minutes when Ciaron Harkin almost put Derry in front, but his efforts were not rewarded following Ogedi-Uzokwe’s swift cross.

The pace of Ogedi-Uzokwe was hard to deal with and with Lynch left chasing, Harkin found space on the edge of the 18-yard box before firing a rocket past Matthew Connor.

It was a superb goal from Harkin, who re-signed a new and improved three year deal with Derry last week, repaying the faith shown in his raw talents.

However, Waterford were far from defeated and they responded well, in fact, they should have been level almost immediately when Bastien Hery found space for JJ Luney but he failed to be fruitful.

Ten minutes before the interval and Declan Devine’s reshaped, youthful Derry side was full of energy and Waterford discovered that time on the ball was at a premium.

Harkin pinched possession from Damien Delaney just outside the D, before playing a simple pass into the pouncing Parkhouse, who couldn’t divert his shot beyond Connor – the young striker should have done better in front of goal.

In the second half, Waterford looked revitalised and they made Derry City pay for missed chances in the first half.

After 60 minutes, City failed to adequately clear the danger in the box, and as Waterford pressurised, it combusted as Darren Cole wildly took out Hery inside the penalty area – Neil Doyle was in no doubt.

From the spot, Shane Duggan stepped up and made no mistake. Game on. 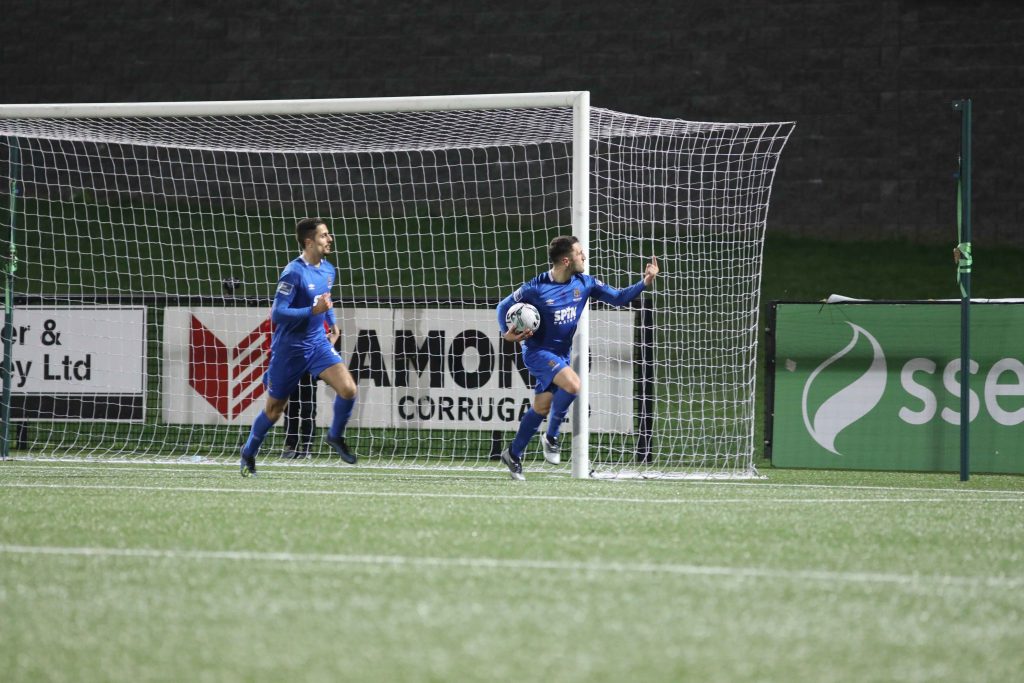 Shane Duggan made no mistake with the penalty (JPPhotography)

The noise on the Lone Moor Road suddenly dulled and Waterford looked dangerous.

And the air was completely absorbed after 65 minutes when Izzy Akinade went brought down inside the area but, Doyle wasn’t interested, instead giving Derry City the free-kick.

With Devine relentlessly hyperactive on the touchline, City scampered on the counter-attack and restored their lead.

Patrick McClean’s inviting cross, with Parkhouse and Ogedi-Uzokwe lurking, was desperately latched onto by Damien Delaney as he sent it into his own net. 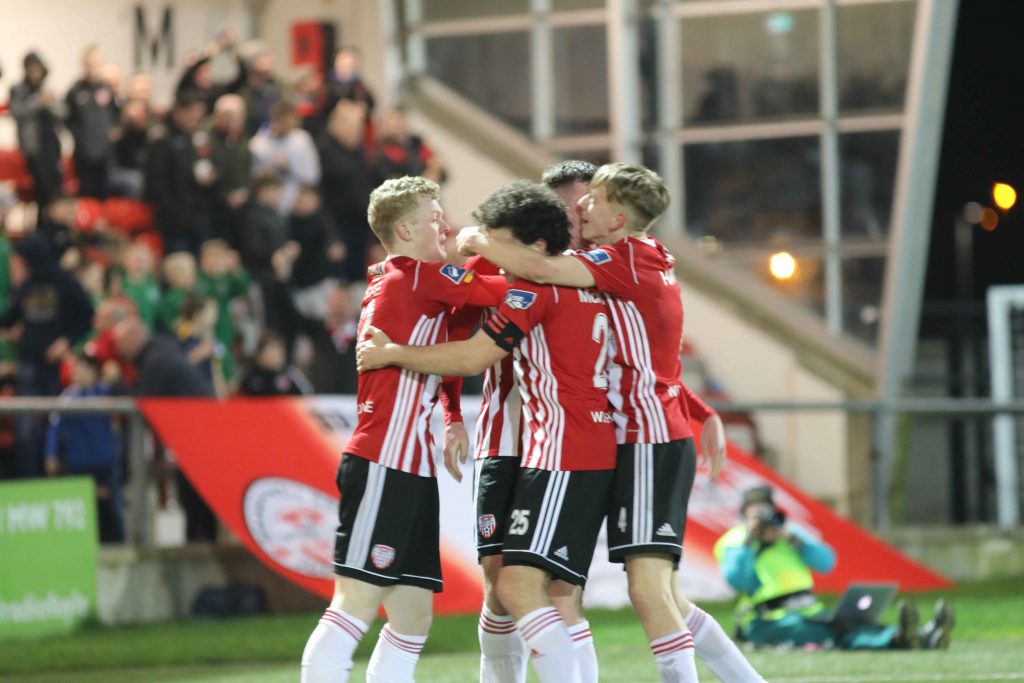 Turning on the style, Derry soon took control and really began to turn the screw.

With Waterford scrambling, super integrate play between Parkhouse, Harkin and substitute Aidy Delap saw Georgyo Poynton put into the back of his own net. It was a nightmare for Reynolds side who conceded their second own goal.

The Blues were down and out, but Croy Galvin never got the message as his 35-yard screamer left Cherrie well beaten to make it a one-goal game and Waterford a chance of securing a point.

Devine was incensed, throwing his coat towards the Derry dugout, the Candystripes invited unnecessary pressure.

With minutes remaining, however, the young Derry side held on, securing a firm and impressive three points.